Posted on 2022 January 14 by Abigail Dairaghi

Did you know that the beloved musical Oklahoma! was based on a play by Oklahoma’s own Lynn Riggs? Riggs was born on a farm in Claremore in 1899, in what was then known as Indian Territory. His professional career produced 21 full length plays as well as multiple poems and short stories. Green Grow The Lilacs, with it’s title from a nineteenth century folksong of the same name, was published by Riggs in 1931 and was quickly picked up by the Guild Theater (now August Wilson Theatre) in New York City and was first performed on January 26, 1931.

It was performed 64 times on Broadway, touring part of the country. The story is rich in American pioneer history with plenty of pioneer grit and humor, and immediately started getting positive reviews from newspapers all over New York. 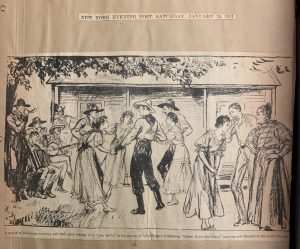 The play caught the attention of renowned Richard Rogers and Oscar Hammerstein, and they got to work putting music and lyrics to the classic American tale. The musical was first debut on March 31, 1943 at the St. James Theatre in New York City and was soon touring the country. 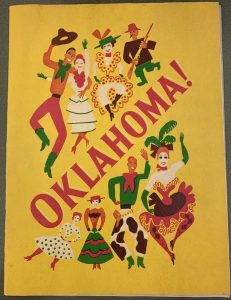 The musical soon got its film adaptation and was premiered October 11, 1955, starring Shirley Jones and Gordon MacRae.

Lynn Riggs was proud of his Oklahoma roots. The love he held for the land shows in nearly all of his works and is still cherished by Americans today. Riggs lead a rich and complex life. He was part Cherokee, gay, and served in the military during WWII.