A Stranger from Paradise:  The Divine Vision of William Blake

An exhibit featuring selected facsimiles from the Kay and Roger Easson Library of William Blake.

William Blake (1757-1827)—English poet, printmaker, and painter—was largely unappreciated and misunderstood during his lifetime.  A mystical luminary, once regarded by some to be insane, Blake is now considered an important figure in the history of the Romantic age and one of the greatest contributors to English literature and visual art.

The University of Tulsa holds a beautiful and well-rounded library of Blake materials, collected by Professors Roger and Kay Easson, and generously donated to McFarlin Library Department of Special Collections in honor of Dr. Winston Weathers, a former member of the TU English faculty. The Easson Library of William Blake includes facsimile editions of Jerusalem, The Marriage of Heaven and Hell and The Book of Thel, to name a few.   Blake’s works are of particular interest to students engaged in the study of book history and graphic design because his illuminated books seamlessly unite illustration and text on the book page.  The Easson collection also features a number of first edition texts that include original Blake engravings, notably Robert Blair’s The Grave: A Poem and William Hayley’s Ballads: Founded on Anecdotes Relating to Animals.  Edward Young’s The Complaint, and the Consolation; Or, Night Thoughts is a particularly exquisite piece. Night Thoughts, originally published in the 1740’s, remained popular during Blake’s lifetime; as a result, Blake was contracted by the publisher, Richard Edwards, to produce a series of engravings to illustrate the text.  Blake created—through his imaginative engravings—his own commentary on the poem.  The University of Tulsa is pleased to hold such an edition of Night Thoughts illustrated with Blake’s engravings.

All are invited to view this selection of Blake holdings from the Easson Library, now on 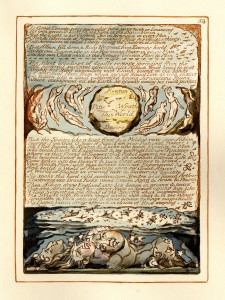 exhibit in the Department of Special Collections and University Archives, 5th floor, McFarlin Library, beginning May 12th through June 21st, 2014.  The exhibit is free and open to the public.

I must create a system or be enslaved by another mans; I will not reason and compare: my business is to create.