New Acquisition: Report from the Society of the United Brethren for Propagating the Gospel Among the Heathen” 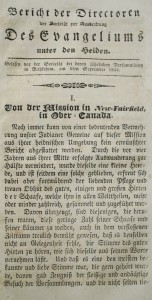 The “Report from the Society of the United Brethren for Propagating the Gospel Among the Heathen on three Moravian church missions to Native Americans including a brief section on their work among the Cherokee Indians in Arkansas, said evangelizing work begun as early as 1740, with teachers sent to live among the Cherokee by the early 1800s” is the newest addition to the Department of Special Collections’ materials related to 19th century European missionary work among the Native Americans. This twelve page pamphlet includes geographical descriptions of Canada, as well as living conditions in territories ranging from Leaven worth, Kansas and Beattie Prairie Arkansas.

This document is dated September 1842 and written in German. The Moravian Church is one of the oldest Protestant denominations, dating back to 1457 and Moravian missionaries were famous for their interest in educating the common man and their prolific hymn and sermon writing. The Moravians established missions among the Inuit in Greenland, Delaware, Cherokee, and a number of peoples in Africa and the Caribbean. The report provides a brief glimpse into the issues facing both missionaries and the people they were interesting in converting. For instance, there is a brief record of a visit from “our Indian Brother Nathan” and a measles epidemic the previous summer. Of interest to both the Moravians and researchers curious about their success is the statement “Finally there was an Indian congregation of 35 communicants, 35 converted and baptized adults, 57 baptized children, 22 partly converted…altogether 149 people , one fewer than in the previous year.”
The “Report from the Society of the United Brethren for Propagating the Gospel Among the Heathen…” is but one of the religious texts that provides insight into attempts to convert Native Americans to Christianity. Other, related texts in our collection include: The Moravian Indian mission on White River : diaries and letters, May 5, 1799 to November 12, 1806 / translated from the German of the original manuscript by Harry E. Stocker, Herman T. Frueauff, and Samuel C. Zeller, edited by Lawrence Henry Gipson, The Four Gospels of Our Lord Jesus Christ in Shawnee Indian Language by Thomas W. Alford from about 1929, Indian hymns in the Seneca language, and bibles translated into Cherokee, Delaware, Mohawk, and other Native American languages.