Posted on 2015 January 6 by Carlos Acosta 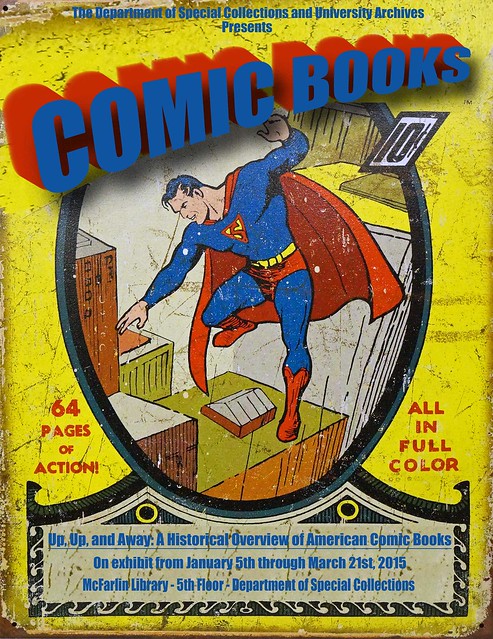 The University of Tulsa and McFarlin Library’s Department of Special Collections and University Archives are proud to announce their latest exhibit titled “Up, Up, and Away: A Historical Overview of American Comic Books.” Beginning on January 5th and extending through March 21st, 2015, the exhibit examines the role of comic books as staples of American popular culture, from its beginnings in the late 1930s to their modern prominence.

The exhibit consists of numerous comic books and comic book-related paraphernalia collected by the Department of Special Collections and University Archives as part of its popular culture-related collections. Visitors can see comic book cover facsimiles from what is known as the Golden Age of Comic Books, including Action Comics No. 1 (the first appearance of Superman), Detective Comics No. 33 (the first appearance of Batman) and Captain America No. 1 (the first appearance of Captain America), all from the Comic Books in Microfiche Collection (1991.006). The exhibit also has materials related to the actual making of comic books, displaying sketches, typescripts and color separations from a variety of comics from the E. Nelson Bridwell Collection (1981.001). Bridwell, a comic book writer and editor from Sapulpa, Oklahoma, worked for DC Comics from the 1960s until his death from lung cancer in 1987. Examples from his original work, some of his memorabilia, and a caricature of Bridwell drawn by comic book artist John Johns are also on display in the exhibit. 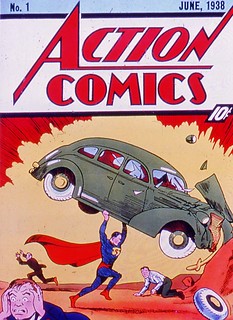 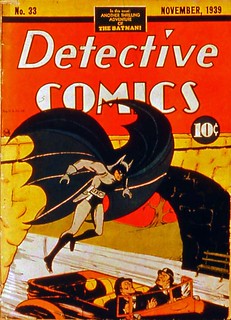 The undeniable cultural impact of comic books is also explored in the exhibit. Visitors can see examples of how the influence of comics extends to other fields like mainstream literature, such as comic book adaptations of Beowulf and the stories of Edgar Allan Poe. Additionally, the exhibit looks at how comics influence other storytelling media such as film and television, and how they are central to what is affectionately called “Nerd Culture.” Comic book influence extends to the science fiction, fantasy, toy, and gaming industries, creating a billion-dollar-a-year bonanza. The industry and its fans hold numerous annual conferences visited by thousands of people. On display are a number of comic book related ephemera such as promotional flyers, publishers’ advertisements, stickers, individual works, posters, convention programs, trading cards, bookmarks, postcards and figurines from the Science Fiction and Comics Ephemera Collection (2006.007). 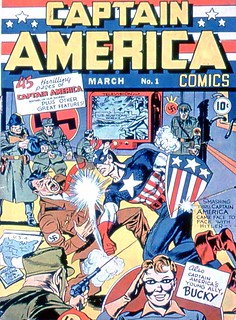 An overview of the history of comic books cannot be complete without a brief the examination of the controversy caused by comic books in the mid-1950s. With the publication of German-American psychiatrist Frederic Wertham’s Seduction of the Innocent in 1954, comic books came under attack as contributors to juvenile delinquency. Wertham made a number of assertions in the book, such as accusing Superman of being a fascist, suggesting that Batman and Robin were a homosexual couple, and that Wonder Woman promoted lesbianism, feminism and sexual deviance. Citing testimony from interviewed juvenile delinquents, Wertham argued that comics were directly linked to criminal activity in children. Wertham’s arguments sparked a movement against comic books that led to hearings in front of the Senate Subcommittee on Juvenile Delinquency and culminating in the establishment of the Comics Code Authority. The CCA policed and censored the content of comic books and banned not only violent images, but also entire words and concepts like “terror” and “zombies.” It also dictated that criminals must always be punished—effectively banning most of the titles published by Entertaining Comics, and leaving a sanitized subset of superhero comics as the chief remaining genre. The exhibit contains cover facsimiles some of the titles that Wertham argued against including Superman, Batman, Wonder Woman, Phantom Lady, Panic, and All True Crime. There is also a first edition of Wertham’s Seduction of the Innocent from McFarlin Library.

The exhibit also looks at the contemporary status of comic books with the display of a number of modern comics that are relevant in today’s cultural context, belonging to the I. Marc Carlson Popular Culture Materials Collection (2013.007). The comic book medium is popular with both children and adults and has cemented its influence in popular culture both in print form and in new digital media. The film industry continues to borrow heavily from comic books and uses them as source material for blockbuster film franchises like Christopher Nolan’s Batman Trilogy, Marvel Films’ Iron Man, Avengers, Captain America, and Thor, and Zack Snyder’s Man of Steel and the forthcoming Batman v Superman: Dawn of Justice. Comic books are also behind a number of hit TV shows such as The Walking Dead, Arrow, The Flash, Agents of S.H.I.E.L.D., Gotham, Constantine, and the upcoming Daredevil and Agent Carter.