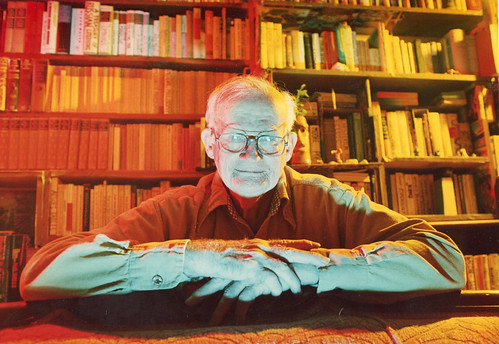 The University of Tulsa’s Department of Special Collections and University Archives is proud to contribute some of its materials to Oklahoma Writers–A Literary Tableau, a multi-venue author exhibit in the Brady District and beyond, organized by the Oklahoma Center for Poets and Writers at OSU-Tulsa and the Oklahoma History Center. This exhibit, on display from March 6th to April 16th, will be located at AHHA, the Woody Guthrie Center, Philbrook Downtown, the Henry Zarrow Center for Art and Education, Greenwood Cultural Center, and the Tulsa Historical Society. One of the featured authors will be the legendary Jim Thompson, author of The Killer Inside Me.

As part of the exhibit, our department will provide facsimiles of materials related to science fiction writer R.A. Lafferty. These materials include Lafferty’s US passport and his diploma from Christ the King Grammar School. The exhibit will also have a letter from R.A. Lafferty to English author Neil Gaiman. Lafferty contributed a poem titled “When the Music Breaks” to Gaiman’s 1986 poetry anthology Now we are Sick: an Anthology of Nasty Verse. A typed manuscript draft of the poem will also be shown. All these materials are part of the R.A. Lafferty Papers collection (1979.002).

Neil Gaiman will also appear as part of Tulsa Reads, a community-wide reading initiative jointly sponsored by the Tulsa City-County Library System, Tulsa Town Hall, the Tulsa World Media Company, and the Oklahoma Center for Poets and Writers. Gaiman, and admirer of Lafferty, will be receiving the Center’s Ambassador Award on March 10th at 7:00PM, at the Tulsa Performing Arts Center’s Chapman Music Hall. The Ambassador Award, first established in 1998, honors writers from around the world whose works reach beyond boundaries to address universal themes. In addition to sharing insights into his work, Gaiman will also be answering questions from the audience.