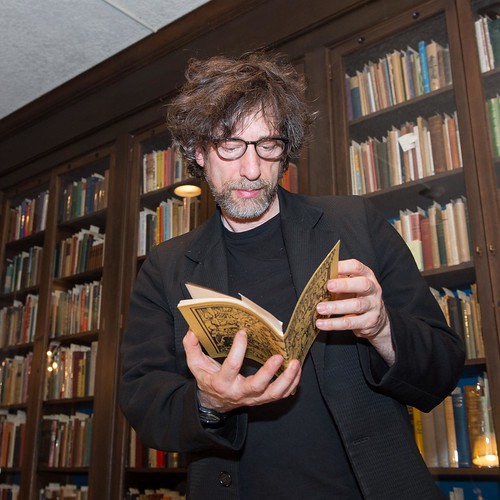 English author Neil Gaiman paid a special visit yesterday afternoon to the Department of Special Collections and University Archives at the University of Tulsa. Gaiman is known for his novel American Gods, his Sandman graphic novels, and his children’s book Coraline, among many other literary works. Gaiman was in Tulsa for an event sponsored by the Oklahoma Center for Poets and Writers at OSU-Tulsa, and took this opportunity to visit our department and take a look at an exhibit of our extensive collection of R.A. Lafferty materials. Lafferty, who passed away in 2002, was an Oklahoma science fiction writer. Gaiman credits Lafferty as one of his biggest influences and the reason he wanted to visit Tulsa. Gaiman is quoted as saying:

I’ve never been to Oklahoma. I’ve never been to Tulsa. And this is odd, because Tulsa has been, ever since I was about 19, the place in America that reeked of literary magic to me. I had plucked up my courage, and written a fan letter to R. A. Lafferty, from an address I found in the back of a book of authors in my local library. He was my favorite author in the whole world, and, months later (because the letter took a long time to find him) he wrote back. He told me how to become an author, and his advice was very good advice, and so I did. It left me quite certain that the finest literary advice in the world came from Tulsa, Oklahoma, for it did in my case.

Gaiman is a devoted admirer of Lafferty’s work, to the point that he wrote an obituary for the The Washington Post upon Lafferty’s death, expressing that Lafferty was “undoubtedly the finest writer of whatever it was that he did that ever there was. He was a genius, an oddball, a madman.”

The Lafferty materials examined by Gaiman included some of his correspondence, typed manuscript drafts of his published and unpublished works, a number of his photographs, fanzines that included his work, and some of his awards. Among these awards were a Japanese Seiun Award (1994), a Phoenix Award (1971), a Hugo Award (1973), and a World Fantasy Lifetime Achievement Award (1990). Gaiman also perused some foreign editions of Lafferty’s works in Japanese, Dutch, Polish, German, French, Italian, and Spanish.
In addition to the Lafferty materials, Gaiman enjoyed the comic book exhibit on display at the department, which will be up until March 21st. The Special Collections staff was delighted to welcome Neil Gaiman to our facilities.