This past Tuesday, April 14th, we commemorated the 150th anniversary of President Abraham Lincoln’s assassination. President Lincoln was shot by American actor and Confederate spy John Wilkes Booth on Good Friday, 1865 while attending a performance of the play Our American Cousin at Ford’s Theater in Washington D.C. After he was shot, the President was taken across the street from the theater to the Petersen boarding house by three doctors and some soldiers who had been in the audience. Their efforts to save President Lincoln were in vain. He passed away from his wounds at 7:22:10 a.m. on April 15, 1865. After a twelve-day manhunt, Booth was shot and killed by Union Army Sergeant Boston Corbett. 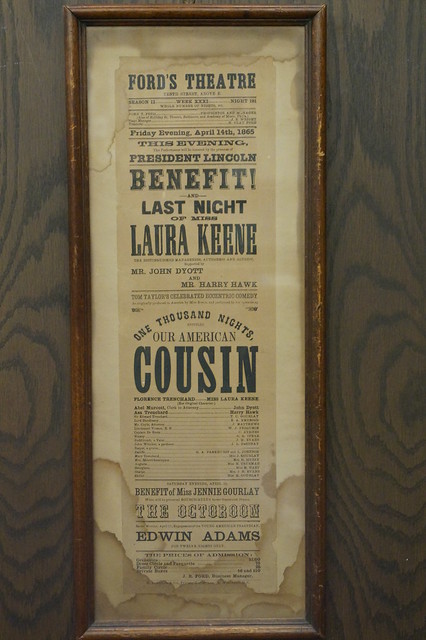 In our efforts to preserve history, the University of Tulsa’s Department of Special Collections and University Archives holds some materials related to President Lincoln’s assassination. For example, our department holds a forgery of the broadside playbill for Our American Cousin for that fateful night printed a few days after the assassination. The genuine playbill did not mention Abraham Lincoln’s attendance, since it was only announced on the same day. This forgery was probably created in order to extort money from unwitting collectors. In addition to the playbill, our department holds a piece of the wallpaper that adorned the walls of the balcony on which President Lincoln was assassinated. This artifact is framed along with a manuscript inscription that reads “A piece of paper hangings detached from the box in which our President was assassinated. F.L. President Lincoln.” 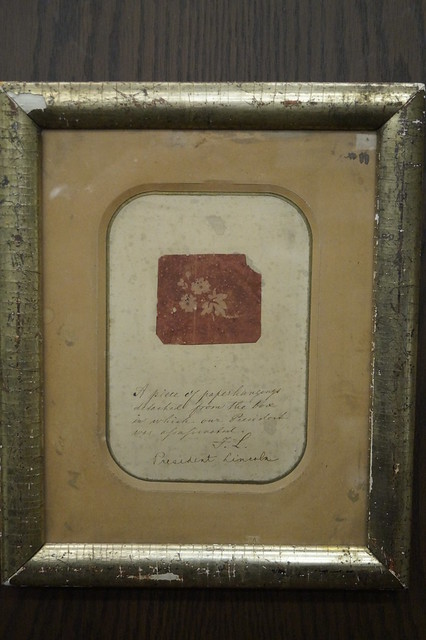 Our patrons may also enjoy looking at the texts from the James Alexander Veasey Library. This personal library contains numerous volumes on the history of President Lincoln, the Civil War, and President Ulysses S. Grant. One of the most interesting books found in this library is an 1868 first edition of the history of the United State Secret Service.