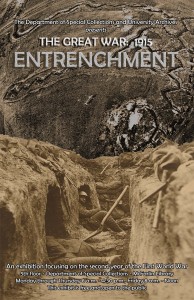 The Department of Special Collections and University Archives presents The Great War, 1915: Entrenchment, an exhibit focusing on the second year of World War I. Featuring photographs, artefacts, and books from a variety of World War I collections held by Special Collections, this exhibit details how advancements in battlefield technology and an emerging philosophy of “Total War” led to increasingly deadly conflicts and the escalation of atrocities both military and civilian.

This exhibit addresses the changing social attitudes of the early twentieth century. These changes were reflected in both contemporary literature and the advancements in technologies used for warfare, such as the use of poison gas, airplanes, and trench lines. The exhibit also focuses on key events that occurred in 1915, including the Gallipoli Campaign, the sinking of the Lusitania, and the development of humanitarian relief.

This exhibit will run from May 4 to Jul 31, 2015, and is open to the public. The Department of Special Collections and University Archives is open from 8:00 AM to 5:00 PM Monday through Friday. However, starting June 1 through July 31, 2015, the department will close at noon on Fridays.