The Clansman: Controversy and Context

Originally published in 1905, Thomas Dixon, Jr.’s novel is actually the second book in a trilogy about the post-Civil War era. The general plot follows the character of Augustus Stoneman as he attempts to reconstruct the South. Stoneman believes he can keep the Republicans in power by gaining the Southern black vote. Stoneman urges Southern blacks to revolt against the Southern whites, and assists with stripping Southern whites of their property. These actions inspire the rising of the Klu Klux Klan’s re-emergence. 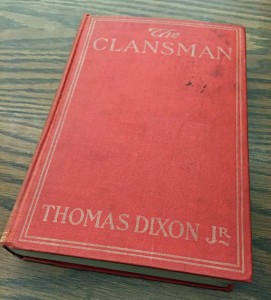 The novel was preceded by The Leopard’s Spots and followed by The Traitor. The Clansman is the most well-known because of the popularity of the play which Dixon co-wrote and the film The Birth of a Nation, which was released in 1915. Dixon co-wrote the screen play and co-produced the film.

Reception of the novel, play, and film was volatile. Dixon’s motive in writing the trilogy, and specifically The Clansman, was to influence Northerners to maintain racial segregation. The NCAAP attempted to get the film Birth of a Nation banned with limited success. Many believe that the film was the real impetus for the re-creation of the Klu Klux Klan in 1915. 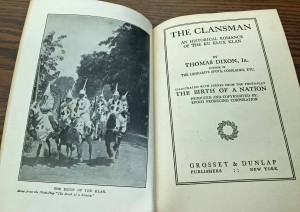 The Special Collections department has recently acquired a copy of The Clansman. The book’s inscriptions indicates that it is a 1905 first edition printing. However, of note, is the inclusion of photos from the photo play. The book is available for public viewing during Special Collections regular hours, which are 8AM to 5PM Monday through Friday.