Posted on 2016 January 29 by Abhinaya Rangarajan

This week, the Department of Special Collections and University Archives celebrates the literary works of George Orwell. He may be thought of as a serious thinker with a prophetic vision. Orwell was born Eric Arthur Blair on 25 June 1903 in eastern India, the son of a British colonial civil servant. He was educated in England and, after he left Eton, joined the Indian Imperial Police in Burma, then a British colony. Soon after the success of his novel, 1984 (1949), Orwell died on January 21, 1950.

George Orwell, one of England’s greatest writers, began his writing career as a journalist. This style is seen in his books. George Orwell has a very direct, journalistic style. He employs allusions and extended metaphors to represent the meaning behind entire books. His style is very dry and direct with little unnecessary imagery and unintended flowery descriptions. This does not mean that the scenery in the piece isn’t described well, it is just not overly poetically described. For example in the book 1984 he states lines such as “He took his scribbling pad on his knee”. He doesn’t try to recreate the look of the entire pad and doesn’t describe how the character flourishes it with a wave of his hand and then smoothes the paper. He doesn’t use fanciful metaphors and flowery language to depict specific scenes. Such is not necessary and is not his writing style. This is extremely important when transmitting Orwell’s theme because he is describing such a world. Most of his books are very pessimistic and in the case of 1984 the world is one where there is no freedom of thought and complete totalitarian control. This succinct writing style transmits the meaning of the theme of the piece.

Orwell’s imagined world of Oceania in the year 1984 is scary enough, just looking at the facts he provides, but Orwell’s style contributes to this world’s bleakness. We learn about 1984’s world through dull, matter-of-fact explanations – which subtly drives home how dull and matter-of-fact daily life is for Oceania’s people.

Not wishing to embarrass his family, the author published the book under the pseudonym George Orwell. George Orwell’s name itself has become an adjective -“Orwellian” – meaning an oppressive system.  Other popular usages such as ‘Doublethink’ and ‘Big Brother’ testifies his lasting impact on the language .

An interesting find was a facsimile of the extant manuscript of 1984 . This facsimile reproduces all details that survived the preliminary drafts. The facsimile [PR6029. R8 N49 1984 Oversz] gives us a demonstration of Orwell’s process of perfecting language and thought. 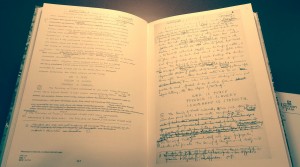 Manual edits on the manuscript

[PR6029.R8 A7 1946] is a first Canadian edition of Animal Farm, “which according to publishing sources, was issued here only after popular success of the American edition and the book club thus suffered poor sales and was probably pulped in the post-war years – this would seem to account for its scarcity” reads an inscription on the book.

Animal Farm was also adapted into a motion picture. [PR6029.R8 A79 1970 Connol Undrsz]  is the strip version of the Halal and Batchelor film Animal farm by George Orwell. The film of Animal Farm was so popular, that many regional newspapers ran it as a strip cartoon serial. 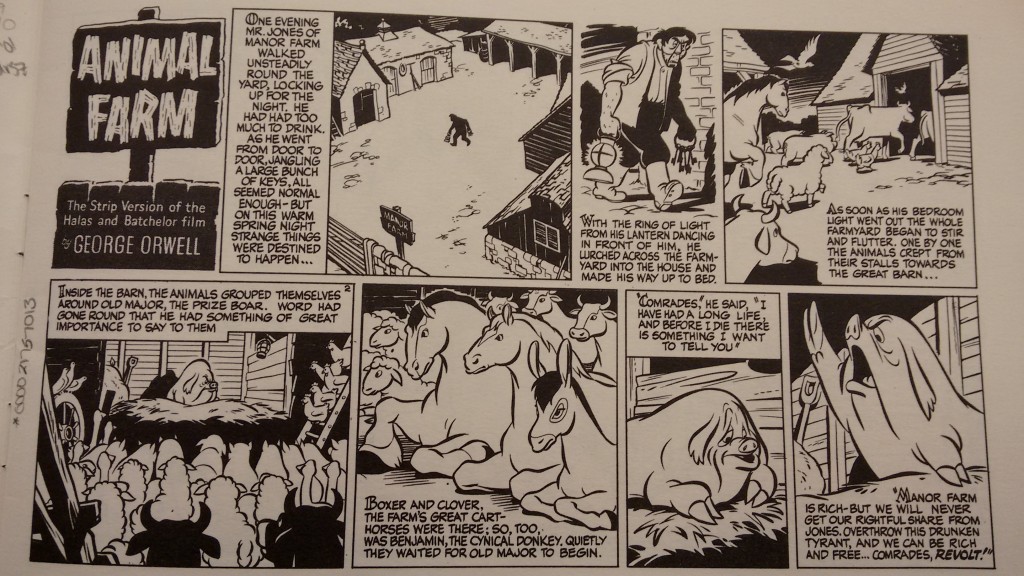 The Strip Version of Animal Farm

Each book is available at the University of Tulsa McFarlin Library Special Collections during regular business hours.

This entry was posted in Collections, General, Guide to Literary and Related Materials, literature, Uncategorized. Bookmark the permalink.