What Good Is A Newborn Baby? – Benjamin Franklin and his works

Posted on 2016 February 24 by Abhinaya Rangarajan

Anyone who is familiar with that phrase, would be so with Dr. Benjamin Franklin’s satirical style of writing that examined the political, personal, and social issues of the time.  Among his many other interests as a politician, Freemason, postmaster, scientist, inventor, civic activist, statesman, and a diplomat, printer and political theorist, he was also a leading author. Franklin freely shared his wisdom and sense of humor. This week’s blog will cover some of the many books that highlight his wit and wisdom. 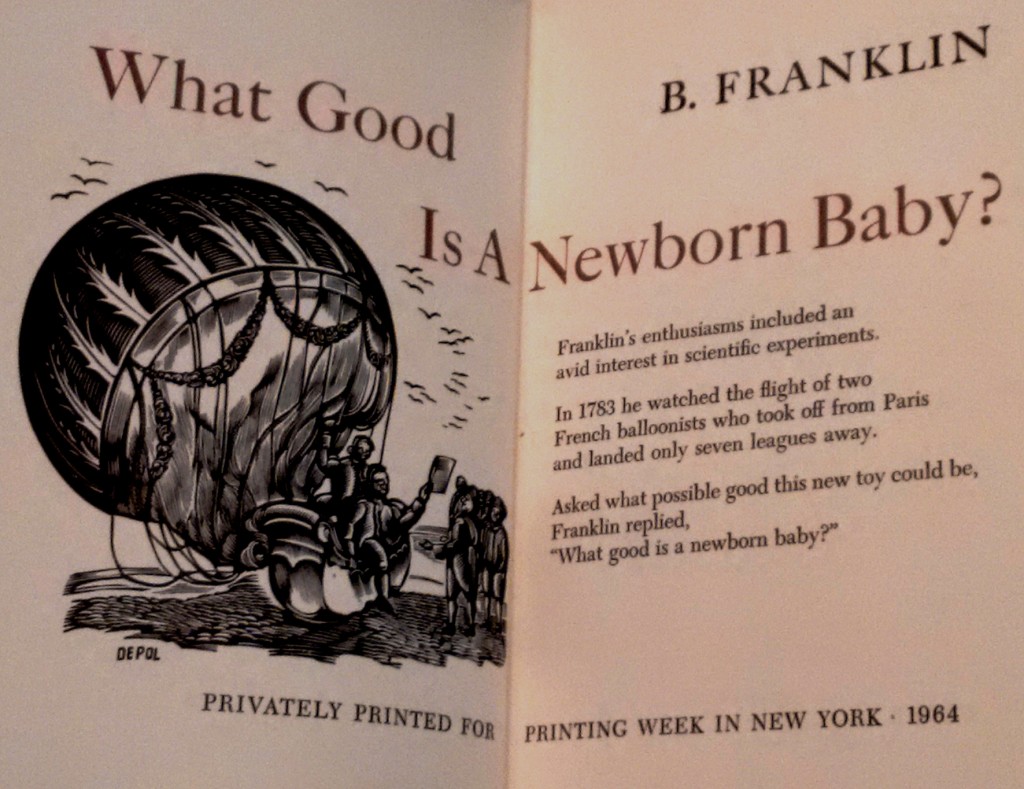 The Department of Special Collections and University Archives houses a variety of such books. Poor Richard , an 1890 edition  includes the prefaces, proverbs, and poems of Benjamin Franklin, originally printed in Poor Richard’s  almanacs for 1733-1758, collected and edited by Paul Leicester Ford. Special Collections also holds a copy of The Works of the Late Dr. Benjamin Franklin consisting of his life written by himself, together with essays, humorous, moral and literary; chiefly in the manner of the Spectator.
In  The Bagatelles from Passy , Benjamin Franklin shows himself to be a bold contemporary of Mozart and Casanova, an eighteenth-century enlightened man (rather than a New England puritan). This was written by him in French and English and printed on his own Press in Paris, while he was America’s first Minister plenipotentiary (diplomat) to the Court of France.

The Department of Special Collections and University Archives has a collection of short books that give the reader a sense of Benjamin’s writing philosophy. He believed that an essential service of man was the free communication of ideas. He snatched The Lightning From Heaven, And The Sceptre From Tyrants  is a short collection of pithy ageless quotations marking important events in the life and times of Benjamin Franklin. Wit is a short collection of poems that radiates Poor Richard’s agreeableness, his double-barreled humor – one kind for his public; another for himself and his friends. Both these keepsakes were published in connection with The Celebration Of Printing Week in the years 1956-57 respectively.

Other similar books include Don’t Give Too Much For The Whistle , which is a true story written by Franklin to his nephew that elucidates certain philosophies that he realized through his life experiences; and What Good Is A Newborn Baby, which briefly summarizes all the roles of an inventor, scientist, and editor and the rest. Franklin used wit and wisdom to make a point that all inventions should have practical relevance to society. The Way To Wealth, and On True Happiness are some other works by Franklin, that would interest readers along similar ideas.

All the books may be accessed at Special Collection through business hours Monday-Friday 8 am-5pm upon request.

This entry was posted in Birthday, General, Guide to Literary and Related Materials, History, literature, Uncategorized. Bookmark the permalink.