WWI diary- An experience at sea

Posted on 2016 March 10 by Abhinaya Rangarajan

The Department of Special Collections and University Archives at McFarlin Library has a vast collection of WWI material for faculty, students and researchers. One example is the personal diary of William John Thorne. W.J. Thorne, a leading telegraphist, kept a daily log while he was sailing on H.M.S. Vimiera (September 1917), H.M.S. Paladin (September 1917), H.M.S. Vega (December 1917), and H.M.S. Oriole (February 1918).

The entries begin on September 19th, 1917 and continue through October 26th, 1918. As seen in many other journals and letters from the Great War, Thorne’s tone changes during the war from adventurous to resigned. On October 14th, 1917, his log reflects his excitement after they had set sail and begun the journey. His entries also occasionally included reports of naval signals that were recorded about the other vessels at sea. 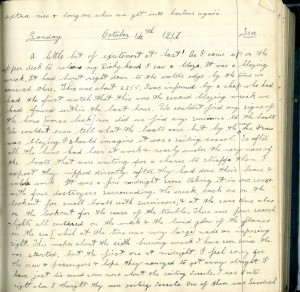 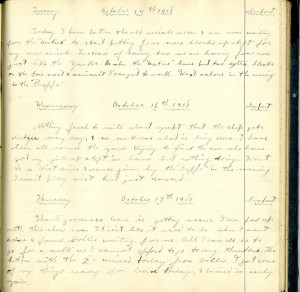 On the 16th of October, 1918- a year from then, one can observe how Thorne’s enthusiasm has worn off, and he mentions how there is “nothing fresh to write about…” in his log.

This personal diary is unique because William Thorne was not a soldier, but a leading telegraphist who was on board chronicling events while they were sailing. On another note, readers may also notice the varying degrees of effort that he took in penning his logs, indicative of his anticipation to go on leave towards the end among the other details that may interest historians.

The Department of Special Collections and University Archives also holds several other WWI diaries that are penned by soldiers at war. Some of their entries end abruptly hinting that they may have faced fatal injuries while at war. All the diaries are open for access to TU students and the public on request during business hours.

This entry was posted in Collections, General, Guide to Literary and Related Materials, History. Bookmark the permalink.