Oklahoma, Where Green Grow the Lilacs and the Wind Comes Sweeping Down the Plain

After working in Chicago and New York as a young man, Riggs returned to Oklahoma in 1919 and began writing for the Oil and Gas Journal. He published his first poem soon thereafter. After a stint at the University of Oklahoma and in Santa Fe, New Mexico, Riggs returned to New York, hoping for a Broadway career. His first major play was produced in 1925. He gained popularity as a writer and teacher, and eventually travelled to Europe as a John Simon Guggenheim Fellow.

While in Paris, Riggs began work on his most famous play, Green Grow the Lilacs, which took him five months to finish. He continued moving around the United States, teaching and writing. Green Grow the Lilacs was transformed into the musical Oklahoma! in 1943, which provided Riggs with a steady income. The play ran from 1943 to 1948 for an astounding 2,212 performances. His works also include Big Lake, A Lantern to See By, Rancor, Roadside, and The Cherokee Night. 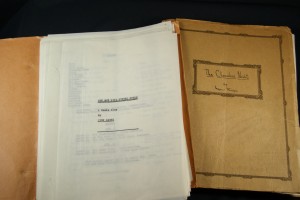 Riggs was inducted into the Oklahoma Hall of Fame in 1943 and into the Hall of Great Westerners of the National Cowboy and Western Heritage Museum in 1965. Riggs passed away from cancer in 1954.

The University of Tulsa McFarlin Library Special Collections and University Archives proudly houses The Lynn Riggs Papers collection (Collection 1971.004), which consists of a variety of materials of Riggs’ as well as materials about him.

Series 1 consists of autograph, typescript, and carbon copy typescript versions of Riggs’ plays, screenplays, and screen treatments written between 1931 and 1944, and some are accompanied by correspondence between Riggs and producers and publishers.

Series 2 is ephemera privately collected and contains correspondence of Riggs’ as well as playbills, photographs, and press cuttings of theater reviews about Riggs’ plays and the premier showing of Rodgers and Hammerstein’s Oklahoma!

Series 3 consists of Phyllis Cole Braunlich’s papers on Lynn Riggs, which were collected during her research before writing Haunted By Home and This Book, This Hill, These People. Riggs genealogical and personal background material boasts family histories and photographs, notes and transcripts from four of Riggs’ scrapbooks, color transparencies of scenes from various plays, press cuttings and playbills.

These materials are available to the public during normal business hours, 8am to 5pm, Monday through Friday. They are housed offsite, so they do require an advance request at least 24 hours before the requested viewing time. Feel free to contact the department at speccoll@utulsa.edu or 918-631-2496 with questions or reference requests.