Posted on 2016 April 7 by Abhinaya Rangarajan

As Department of Special Collections and University Archives is currently organizing the Arkansas Basin Development Association collection [Coll. No. 1991.007], Jennifer Carlson, a MSM Graduate Student intern chanced upon an image, originally on a 35mm slide, of the Space Shuttle Enterprise being barged along a (Mississippi) river.

One of our Special Collections Librarians, Melissa Kunz, worked on identifying and gathering more information about the image. After multiple searches and re-renderings of the image came up short, Melissa connected with the archivists at the NASA Library in Washington, DC.  From there, the NASA librarian helped Melissa trace the image back to the 1980s: the vessel was to be exhibited at the 1984 Louisiana World Exposition, that was a World’s Fair held in New Orleans, Louisiana, in the United States. 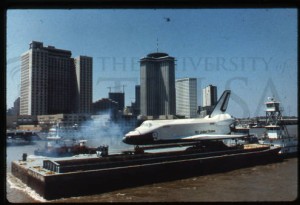 Space shuttle Enterprise being barged to the World’s Fair 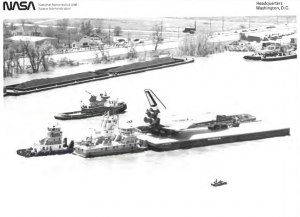 Image of the Space Shuttle Enterprise taken from the other side

Rolled out on September 17, 1976, Enterprise was built for NASA as part of the Space Shuttle program to perform atmospheric test flights after being launched from a modified Boeing 747. It was constructed without engines or a functional heat shield, and was therefore not capable of spaceflight.

The Fair was held along the Mississippi River front near the New Orleans Central Business District, on a site that was formerly a railroad yard.  The Space Shuttle Enterprise was displayed from May 12 through till November 11 at the 1984 World’s Fair. It is also noted that Enterprise, one of the highlights at the ’84 Fair, was ferried from California to Mobile, Alabama, where it was then barged to the fair site located along the banks of the Mississippi River.

This photograph is posted online on the Special Collections digital collections webpage. Anyone who is interested in obtaining copies of any of the images should contact the Department of Special Collections, McFarlin Library, The University of Tulsa about requests for photo-duplication, publication policies, and applicable charges.