Malaeska, the Indian Wife of the White Hunter 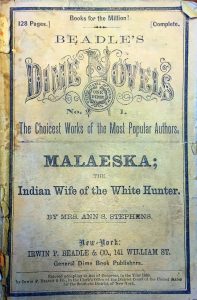 A hundred and fifty-six years ago today, a new literary format was unveiled.  The Dime Novel was born in an attempt by the publishers Erastus and Irwin Beadle to make money on inexpensive, ephemeral literature entitled Beadle’s Dime Novels.  The first of this new series of books was Malaeska, the Indian Wife of the White Hunter, by Ann S. Stephens. It had a cover date of June 9, 1860.  As was common with dime novels, this work was a reprint of an earlier publication, Malaeska had been serialized in Ladies’ Companion magazine in February, March and April 1839.

Malaeska is a story of interracial marriage and many of the tragedies that result from that.  By today’s standards it is irrecoverably racist and written in a prose style that is difficult for many moderns to read.  It is however a significant window into early 19th century, and the racial politics of the time, much like Poor Sarah, which Special Collections also holds.

Dime novels were very popular, particularly with younger, working-class readers, and were snubbed by the more upper-class literati, effectively establishing the genre ghettoization still prevalent in popular literature today.  The term dime-novel itself eventually became a high-brow slur for any sort of cheap , sensational fiction.

Eventually dime-novels were superseded in the early 20th century by their heirs, the pulps.

Other in this blog on this topic can be found here.

The Librarian of Special Collections and University Archives, McFarlin Library, The University of Tulsa since November 2005.He holds a Masters in Library and Information Studies from the University of Oklahoma, and a Bachelor of Arts in History and Anthropology from Oklahoma State University. He has worked in McFarlin Library since 1986.
View all posts by Marc Carlson →
This entry was posted in Collections and tagged collections, dime novels, Libraries, Literature, popular culture. Bookmark the permalink.