Posted on 2016 November 2 by Jennifer Murphy

The University of Tulsa Special Collections and University Archives houses more than just books. When looking through our oversize collection this week, I came across a folder titled Tom-Tom and, of course, I was curious as to what was inside. I quickly realized that Tom-Tom was a school newspaper published by students of Tulsa High School and Banknote Printing Company during the early 1900s.

The first edition of Tulsa’s newspaper Tom-Tom was published in 1909. It was given top ratings by the Oklahoma Inter-Scholastic Press Association and has been ranked nationally many times since 1926. Tulsa High School modeled their school paper, also called Tom-Tom, in its form. At first the school paper came out once a month but, in 1918, a class was formed specifically to distribute the paper. The name of the school paper later changed from Tom-Tom to Tulsa School Life. In 1939, the paper began to discuss news from all three Tulsa High Schools. 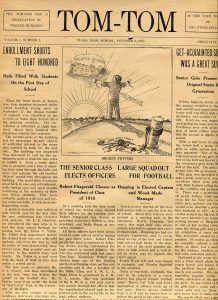 “we have entered a new building where the beautiful is all about us, [with] all the    things that the student could possibly wish for…”

Around 5,000 students attended the new school between tenth and twelfth grade. It was not until the construction of Tulsa’s freeway and the cost of downtown parking that the school decided to move its location outside of downtown. Tulsa Central High School moved to a forty-seven acre lot and campus was opened in 1976. The Old Central High campus now serves as the headquarters for the Public Service Company of Oklahoma (PSO). The building was recognized by the Tulsa Foundation of Architecture as a historic Tulsa landmark.

This entry was posted in Collections, History, News and tagged collections, history, Tulsa. Bookmark the permalink.