Posted on 2016 November 8 by Jennifer Donner 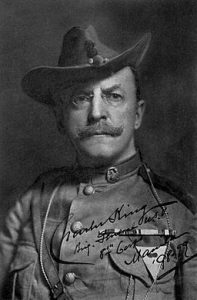 General Charles King (1844-1933) was an American author who spent most of his life in the military. A graduate of West Point, he served in the Army until he was wounded at the Battle of Sunset Pass during the Yavapai War. Later in life he served as Brigadier General of Volunteers during the Spanish-American War where he helped out after the Spanish surrendered. During the Philippine-American War, he led a brigade during the Battle of Manila and the Battle of Pagsanjan. Once he returned Wisconsin, he stayed active in the Wisconsin National Guard and helped train troops during World War I.

Charles King published over 60 books and novels relating to military life, western adventure, and frontier and pioneer life. While he had published quite a bit before 1893, he lost much of his royalties when the bank he used failed. He then lost most of his books and papers in a warehouse fire. This pushed him to come out of his retirement back into the military, hence his involvement with the Volunteers from Wisconsin. He also began writing and publishing again in his non-military free-time.