Posted on 2016 November 9 by Marc Carlson 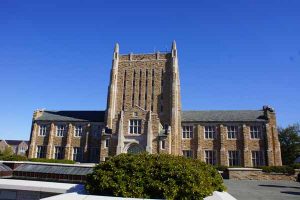 People at the University of Tulsa may have noticed over this last fall work being done on the McFarlin Library building. Most of this has been necessary maintenance and cosmetic repairs to the building. This began with repairing the slate roof tiles, and starting this morning, some scaffolding on the roof to snug up some minor masonry separation before it becomes an issue.

As we have discussed in the past, McFarlin Library was built beginning in 1929, and completed in 1930 along with Phillips Hall and Tyrell Hall. The architect was Henry C. Hibbs of Nashville, Tennessee. The original architectural plans are with the Henry C. Hibbs Papers, 1882- at the Nashville Public Library. 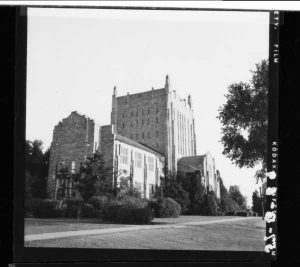 The library became a true heart of the university, and for many years graduation ceremonies were held on the west steps of the building facing the original “U”.  The student ROTC met and drilled on the “U”, and the homecoming Bonfire was held annually, just to name a few.  In our collections we have images of the bright Christmas lighting on the library that is reflected today in the holiday lighting on the Tucker Drive oval, the new “U”.

Over the years there have been three major alterations to the building. In 1967, the original tiny east wing was removed and replaced with a considerably larger structure that still remains. 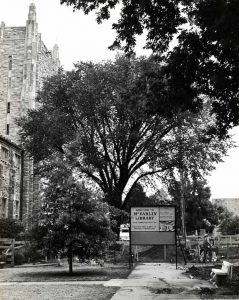 In 1979, the library built the underground book stacks portion and leading to the dedication of the Albert Plaza on the west side. 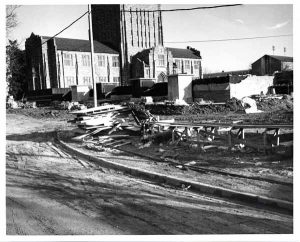 In 2009, the Pauline M. Walter Technology Resources Center was dedicated on the north side of the 1967 wing, further propelling the library into the modern digital age.

As may be seen, the University strives to keep up with needs of the library and its care. 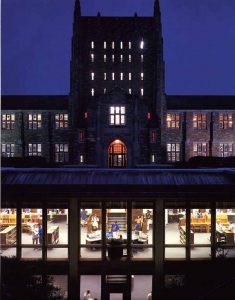