Posted on 2016 November 18 by Hannah Johnson 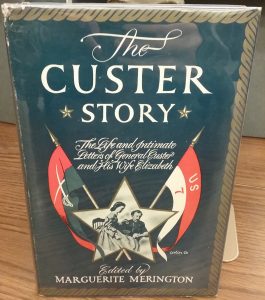 General George Armstrong Custer and Elizabeth Clift Bacon had a devoted and passionate love affair that lasted their entire lives. Custer was a young cavalry officer in the Union Army at the start of the Civil War. He formally met his future wife Elizabeth, often called Libbie, in 1862. Due to her family’s objection they were not allowed to meet together or become engaged until 1963, after Custer had obtained a higher rank. Despite the opposition of her family, the couple began corresponding clandestinely through a mutual friend, until they were allowed to write to each other directly.  They were married in February of 1864. They sent many love letters to each other filled with endearments and innuendo. Special Collections has a first edition copy of The Custer Story: The life and intimate letter of General Custer and his wife Elizabeth by Marguerite Merington, published in 1950. This book also has many letters to and from other relatives and friends of the couple and provides glimpses into the intimate and daily life of the Custers.

A few of the more personal intimate passages are as follows: In June of 1864 Custer’s belongings were stolen by Confederate soldiers. Among these things were his letters from Libbie. In Custer’s next letter, June 21, 1864, to his wife, informing her of what had occurred, he chides Libbie to be “more careful hereafter in the use of double entendu.” Libbie replied,

“I suppose some rebel is devouring my epistles, but I am too grateful to feel badly about that. Let me unburden my mind about the matter, since you letter implies chiding, tho the slightest and kindliest. No Southerner could say, if they are a gentleman that I lacked refinement. There can be nothing low between man and wife if they love each other. What I wrote was holy and sacred. Only cruel people would not understand the spirit in which I wrote it.”

“And so “Somebody” thought her boy intended to chide her at least little bit about her captured letters? Ha, ha, dear one, you do not know him if you suppose he intended to “chide” his heart’s idol. I only wished to impress on you the need for more prudence in writing—but the effect was not lasting, for the very next letter would afford equal amusement to my Southern acquaintances as those now in their hands. Now do not think me exacting or too particular.” 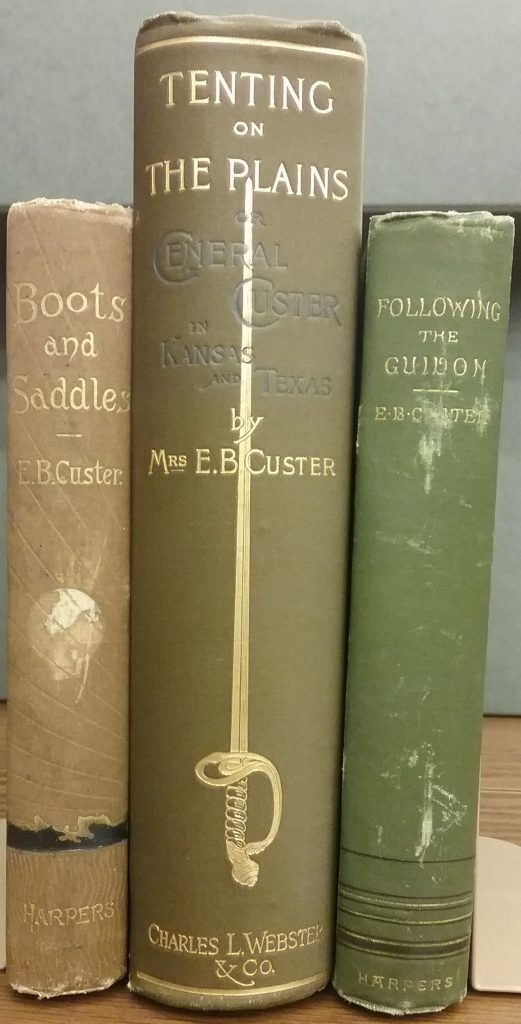 General George Armstrong Custer is most known for his last battle against the Lakota and Northern Cheyenne Native American tribes in Montana territory, the Battle of Little Bighorn. This battle is considered one of the most controversial that occurred in the United States. After his death, Mrs. Custer began a campaign to exonerate Custer’s failure and immortalize him as a Civil War and Western frontier hero. She wrote three books about her life with Custer during the Civil War and in the Western territories; Boots and Saddles (1885), Tenting on the Plains (1887) and Following the Guidon (1890). Special Collections has first editions of each of these books. Libbie never remarried and spent the rest of her life writing, speaking about her life with Custer and ensuring the memory of her husband remained positive in American history. Due to her efforts the early to mid-20th century viewed Custer as an American icon.