Posted on 2016 December 7 by Amanda Vestal

McFarlin Special Collections and University Archives is home to many objects related to Tulsa and Oklahoma history.  Many of these are part of the Oklahoma Collection (Coll. 2006.012) and provide insight into the vibrant history of the state.  Part of this collection focuses on the Tulsa Municipal Airport and its interesting background.  Surprisingly, Tulsa is well-connected in the aviation industry with relationships with Boeing and American Airlines.  In fact, Tulsa is the global maintenance headquarters for American Airlines.  The airport is also able to boast that it was the busiest airport in the world in 1930.

One box of this collection contains three ledger books from the Tulsa Municipal Airport from July 1928 through May 1934.  The entries in the ledgers contain the pilot’s signature and information for the flight including the destination, departure times, type of aircraft, and the owner of the aircraft.  The first ledger contains a note from the airport’s acting manager about its official opening.  It was dedicated on July 5th, 1928 following the arrival of the National Air Tour at the airport two days before.  The first delivery of mail left the airport on July 5th at 6:30 PM and carried 186 pounds of mail.  The second ledger makes reference to the business of the airport during 1930.  It states that “[passenger] records have been repeatedly broken by this airport” and that for the last five months Tulsa has had more passengers and flights than the main airports in Berlin, London, and Paris.  This note also boasts that they have 40 flights in and out each day; for comparison, on the first date listed in the ledger (July 13th) in 2016 the Tulsa airport had 600 operations.  For me, the most intriguing part of the ledgers are the pilot entries.  Amelia Earhart’s name is listed three separate times, Charles Lindbergh is listed once, and Wiley Post is listed several times throughout the ledgers.  The entry for Lindbergh contains a note saying that it is his real signature.  The ledgers are available for any registered reader to see. 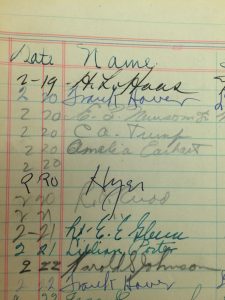 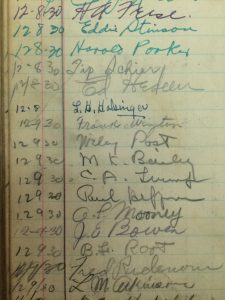 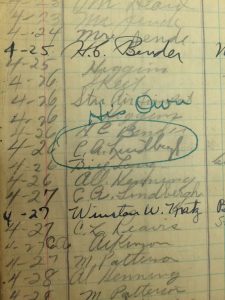