Posted on 2017 March 8 by Jennifer Donner

Mildred Darby started out life as Mildred Henrietta Gordon Dill and grew up in England. She married Jonathan Darby in 1889 and moved to Leap Castle, located in Coolderry, County Offaly, in Ireland. As Mildred settled into life in an Irish castle, she became more interested in the plight of the Irish people under the rule of the English. She believed that the English had treated the Irish very poorly and felt it was necessary to tell the world about how the Irish were really treated. At the time, much of the information coming out of Ireland was spun in a way to make the English look good while the Irish looked like lawless natives who needed to be put in their place. Luckily, Mildred was also secretly a writer. She used the pseudonym of Andrew Merry to publish a number of articles and books. McFarlin Library Special Collections has a copy of one of her books, titled The Hunger, Being realities of the famine years in Ireland, 1845 to 1848 (DA950.7.M4 1910). 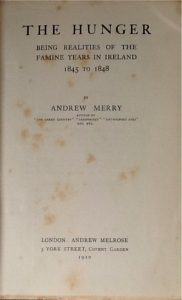 At the time, no one realized that Andrew Merry was actually a woman writer. Her writing style has been described as very masculine and very gothic. Under this name, she also wrote about the occult. In the late 19th and early 20th century, there was a growing interest in spiritualism and occultism. Mildred felt that Leap Castle was the perfect place to hold séances since it had a long history of being haunted. 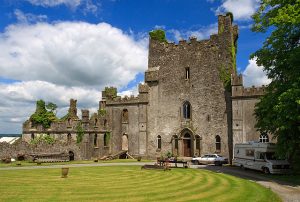 Some would say that Mildred helped Leap Castle become known as the most haunted castle in Ireland due to articles she wrote about ghostly activities she experienced in the castle. She also documented her experiences with an entity she called ‘The Elemental’ and published them in journals such as Occult Reivew. Unfortunately, her husband discovered that she was published her writings and forced her to stop. She followed his wishes about not publishing but did not stop writing.

In 1922, Leap Castle was burned during the Irish Civil War. The family was forced to return to England for a short period of time and then back to Ireland to live with family in County Longford. This move back to Ireland was to get compensation for the burning of the castle through the 1923 Compensation to Property Act. Mildred claimed she lost at least two drawers of writings that she had hoped to publish in the future, placing a price of £4,327 on her loss. After many appeals by the government and by Jonathan Darby, the Darby family finally received £6,950 for the burning of Leap Castle. The family never returned to the estate and Mildred never published again under the name of Andrew Merry. She passed away on January 5, 1932.