Posted on 2017 September 22 by Jennifer Murphy

The University of Tulsa Department of Special Collections and University Archives is well-known for its World War collections. We currently have an exhibit on World War I, so I began to browse our storage room to familiarize myself with the vast amount of other accessible WWI materials. I happened to find the Canadian official war record: magic lantern slides (Coll. No. 2001.025). There are forty-nine slides dated 1914 to 1918. These slides depict scenes of soldiers, battlefields, hospitals, and cities primarily located in France.

One fascinating image is of the Ypres Cathedral located in Belgium (Slide No. 453). Original construction began in 1230 but the building was rebuilt many times as a result of war damage, including World War I. The building was completely abolished from 1922-1930 and rebuilt from the original plans but with a higher spire. On the left is the Canadian lantern slide and on the right is the Cathedral today. 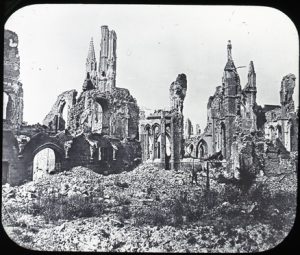 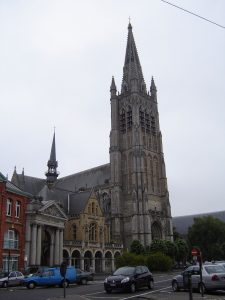 Another fascinating image is titled Canadian Red Cross men in action (Slide No. 753). During World War I, the Canadian Red Cross Society (CRCS) donated money to support refugees return to demolished parts of Europe. Women and men from church groups and clubs also provided clothing and medical supplies. On the action front, CRCS set up headquarters in London. They were active with allied hospitals locating missing soldiers and keeping records of the sick and injured. 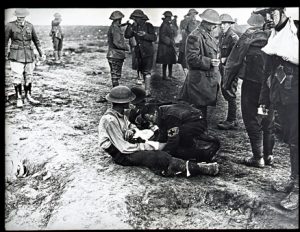 These slides were created by the Canadian War Records Office. Negatives, numbered around 2,000, were reproduced to display Canadian participation in World War I. They were used to promote Canada’s tie to Britain at a public exhibit.

To view this collection or any of our other materials, please come visit Special Collections during normal business hours Monday through Friday from 8:00 am to 5:00 pm. You can also access our Library Catalog and Collection A-Z list from home to search through our materials.

Have a great day!