Posted on 2017 October 6 by Amanda Vestal

McFarlin Special Collections and Archives has many World War I collections that include clothing, diaries, letters, and photographs. One of these collections, the Joseph Moller Photograph album of Kelly Field 1918-1919 (2011.0.36), consists of 93 photographs with handwritten captions on black paper. These images depict pilots in training, planes in flight and formations, close-ups of different parts of the planes, and the camp itself. 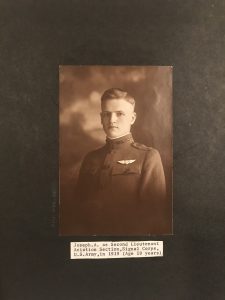 Joseph Moller was born at the turn of the 20th century. He lived in St. Louis and New York for much of his childhood and even worked on a ranch in Montana for a period of time. He enlisted in 1917 and was sent to Kelly Field in San Antonio, Texas to “earn his wings.” He was made a second lieutenant in 1918 but does not seem to have seen any action in World War I. However, he remained in the military reserves and when the U.S. entered World War II he joined in the fight. He became a colonel and was placed in command of the 390th Bombardment group. Throughout WWII he flew 49 combat missions and received 16 medals for his work in the war including a Silver Star, the Distinguished Flying Cross with several clusters, the Legion of Merit, and medals from both the French and Polish governments. After the war he went back to his job at Pure Oil for a couple of years and then went on to own a ranch outside of Tucson, Arizona named M-Flying-M ranch. While living in Arizona he and his wife helped establish the 390th Memorial Museum in Tucson where there is a library named after Moller containing the complete records of his unit’s missions in WWII. 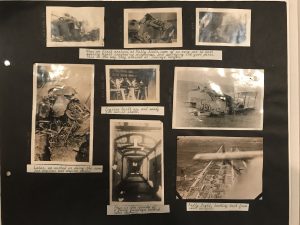 All of the photographs in the album are accompanied by detailed captions that tell stories about the people and the aircrafts in the images. One photo shows a plane has flipped over on the ground. According to Moller, the very narrow wheels on the landing mechanism is to blame for this incident. The narrow wheels forced the weight of plane as it was landing onto such a small surface area that they would dig into the ground, not allowing the plane to slow down very affectively, and the weight of the nose would then pull the plane forward causing it to flip.  Another image shows a crashed plane which Moller explains was constructed by him and some of the other men in training from spare parts and a motorcycle engine. The men fought over who would get to fly it first but it crashed on the first attempt and they gave up on building another one. An image taken by one pilot of another plane in flight slightly below the one the photographer is in shows how the well-known portraits of pilots mid-flight were taken. The plane slightly below the other would have a camera attached to it and the person in the back pilot’s seat would take a photograph of the pilot of the aircraft slightly above and to the side of the other. These are only a few small examples of the interesting images and information that can be found in Joseph Moller’s album. 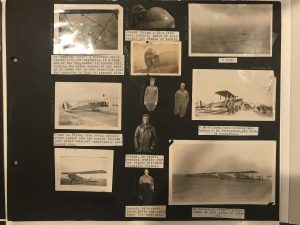 To view this or any other of our collections please check out our finding aid here or stop by our department on the fifth floor of McFarlin Library anytime Monday thru Friday 8am until 4:30pm.