Sherlockiana: the infatuation with Sherlock Holmes

Throughout recent history, people always seem to be intrigued with mystery. Whether it’s a simple mystery of who ate the last cookie, when one child still has crumbs on their face, or a complex mystery that takes story-boards and focus to solve. Mystery as a genre has been around since the early 1800s. Prior to this, there was a lack of organized police forces. However, with the industrial revolution and crowded cities popping up, an organized crime solving unit became necessary. And so began the fictionalization and infatuation.

Most people who are interested in mystery and crime novels can tell you their favorites, be it the Pendergast series, The Godfather, or other lesser-known literary works. However, it almost always holds true that they can tell you at least something about Sherlock Holmes. 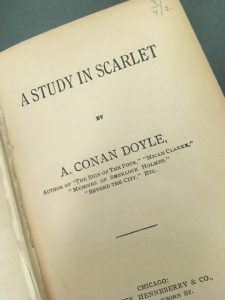 One of the Sherlock Novels!

Holmes is a fictional private detective that was created by Sir Arthur Conan Doyle. Doyle wrote four primary novels about the endeavors of Sherlock Holmes. In the novels, Holmes uses his skills to solve crimes as what he calls a “consulting detective”. He regularly works on cases that he becomes interested in due to their complexity, and he is usually employed by a client, often times the Scotland Yard.

Holmes ability to separate fact and fiction, and constantly let no detail escape him made him one of the most recognized characters of all time. After Doyle’s books, he also wrote several short stories in which Holmes solved smaller crimes, usually with his trusty sidekick Dr. Watson. Recently, multiple movies have been released centered around Sherlock Holmes as well as a Television series and a Netflix series. There is even an animated film that was just released called “Sherlock Gnomes”, which portrays Holmes as a Gnome trying to solve a mystery of a disappearance. 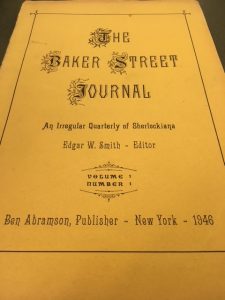 Aside from this, there is also an entire community that celebrates Holmes much in the way “Trekkies” celebrate Star Trek. They have conventions, clubs, and other events in which they come together to celebrate their appreciation of Sherlock Holmes as a character and a professional. Here is Special Collections, we have the Jack Powell Collection of Sherlockiana. This collection consists of photographs, event programs, convention announcements, book lists, club publications, actual books, and much more. In the photo here, you can see one of the copies of the Baker Street Journal, the quarterly publication of those in the Sherlockiana community. Within this journal, people dive into the actual life of Sherlock Holmes, and talk about him as a character and real person. This is just one of the many things you can find in the Jack Powell Collection. The collection inventory can be viewed online at https://utulsa.as.atlas-sys.com/repositories/2/resources/475. If something happens to spark your interest, you can always come see us in Special Collections Monday-Thursday 8:00-4:30, and Friday 8:00-11:30. The Sherlockiana collection spans multiple boxes and books and is sure to intrigue any Sherlock enthusiast, while leaving you yearning for more!