The short story, Direction of the Road, written by Ursula K. Le Guin caught my interest while exploring Special Collections earlier in the week. American writer Ursula K. Le Guin was born in 1929 in Berkeley, California. She attended Radcliffe College and did graduate work at Columbia University. She is known for her work within the genres of fantasy and science fiction. She’s written a multitude of novels, short stories, essays, children’s books, and poetry. Throughout her career she’s accumulated multiple awards, such as the National Book Award, five Hugo Awards, five Nebula Awards, SFWA’s Grand Master, the Kafka Award, a Pushcart Prize, and many more. 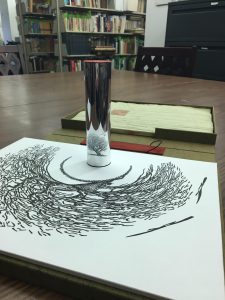 Her short story, Direction of the Road, stretches the definition of what a book can be; it’s both a book and a piece of art. The story, which is housed inside a portfolio box, is accompanied by an anamorphic illustration of an oak tree. The story is written from the perspective of the oak tree who is watching the world change before it. The tree tells of a time before automobiles were invented and how the land and human behavior changed when they became popular. It’s a true tale of perception and perspective.

The woodcut illustration created by Aaron Johnson interested me the most, because of it’s unique style and relation to the book. First, the illustration is a form of anamorphic art or illusion. This particular style of art deals with optical illusions that require assistance to reveal the true image. At first glance the illustration does not appear to be a mighty oak tree that the story depicts. By using the mirrored cylinder found in the center of the box spine and standing it on the printed circle, the “corrected” image of the oak tree seemingly pops off the page. Second, this use of anamorphic art gives the illustration an interactive role when paired with Le Guin’s short story. The reader is able to connect with the book in a unique way. Ursula K. Le Guin and Aaron Johnson have pushed the boundaries of what a book can be by combining literature and art.

If this short story and anamorphic art sparks your interest, you can always come see us in Special Collections, located on the 5th floor of McFalin Library, Monday through Friday 8:00am until 4:30pm.