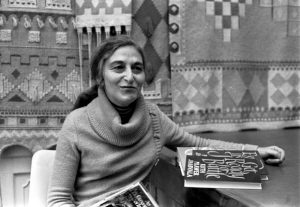 Ruth Prawer Jhabvala is the only person to win both a Booker Prize and an Oscar. During her lifetime she wrote a dozen novels, 23 screenplays, and numerous collections of short stories. In 2002, she was granted a joint fellowship by BAFTA with James Ivory and Ismail Merchant. Jhabvala was also awarded the Commander of the Most Excellent Order of the British Empire (CBE) in 1998. She is best known for her collaboration with Merchant Ivory Production, where she won two Academy Awards for Best Adapted Screenplay, for Howards End, 1992 and A Room with a View, 1987. Her novel, Heat and Dust received Britain’s highest literary honor, the Booker Prize.

Jhabvala was born on May 7, 1927 in Cologne, Germany and passed away on April 3, 2013 in New York. She was only 12 years old when her family fled from Hitler and moved to London. In 1951, she received an MA in English literature from Queen Mary College. That same year, she married the Indian architect, Cyrus Jhabvala and moved to Delhi. During her time there, she raised three daughters and wrote novels and tales about her experiences. She moved to the United States in 1975 and became a naturalized citizen. Her last story “The Judge’s Will,” was published in 2013, appearing in The New Yorker. 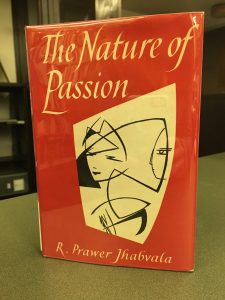 Special Collections houses three manuscript notebooks consisting of handwritten drafts of Jhabvala’s short stories (1980-004). It includes “Desecration” and “How I Became a Holy Mother,” the play, “A Lost Cause,” and the novel, Heat and Dust. Notes and draft fragments can be found clipped to pages as well. We also have several of her books, such as Shards of Memory (PR9499 .3 .J5 S33 1996b), Three Continents (PR9499 .3 .J5 T47 1987), and The Nature of Passion (PR9499 .3 .J5 N37 1956 Undrsz). If you are interested in viewing these manuscripts, you can always come see us in Special Collections, located on the 5th floor of McFarlin Library, Monday through Friday 8:00 am until 4:30 pm.