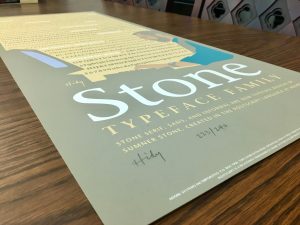 Graphic designer, Lance Hidy, is best known for his style of printing by creating clean-cut and minimalist posters. His unique designs stand out with their simplistic nature, vivid colors, and hard-edged shapes. Hidy was born in 1964 in LaGrande, Oregon. He studied art and graphic design at Yale University in New Haven, Connecticut.

A few major highlights of Hidy’s career was working with Ansel Adams to design the last book of Adam’s career, Yosemite and the Range of Light, and he continues to design books for the Ansel Adams Publishing Rights Trust. He was commissioned by Adobe to adapt the lettering in his posters into a typeface called Penumbra, which includes a family of 16 fonts. He’s created three different postage stamps for the U.S. Postal Service and posters for the Boston Symphony Orchestra, Acme Bookbinding, and Beardsley’s Restaurant.

His career went beyond designing posters, stamps, and fonts, he’s held faculty positions at multiple Universities, such as the University of Kansas in 1996, where he taught courses in poster design and graphic novels. He is currently a half-time faculty member at Northern Essex Community College in Haverhill, Massachusetts, where he’s teaching courses in Graphic Design II, Photoshop, and Computer Illustration.

The style of printing that Hidy utilizes is commonly known as silk screen printing, but can be known as serigraphy or serigraph printing as well. This printing style first appeared in China during the Song Dynasty (960-1279 AD) and was adapted by other countries creating newer methods of application. To create a screen print a piece of mesh or silk is stretched over a frame. Then, a stencil is created for each color that will appear in the print; each stencil having its own frame. Next, ink is pulled across the frame, which has been placed over a sheet of paper. The ink is then forced through the screen and onto the paper creating a new layer of the print. This process is repeated until all the colors have been applied for each edition of the print.

Special Collections houses 12 posters (three of which are signed and numbered by Lance Hidy), three event posters, two Electric Design posters, one typography sheet, one exhibit program, and seven promotional art cards (1995-023-OVRSZ). If you are interested in viewing Lance Hidy’s work, you can always come see us in Special Collections, located on the 5th floor of McFarlin Library, Monday through Friday 8:00 am until 4:30 pm.