The Journal of the USS Paulding

Posted on 2019 December 13 by Kelsey Hildebrand

One of our collections consists of only a journal. This journal is a small, green, cloth-bound book and it’s chock full of writing.  The USS Paulding was a destroyer active through World War 1, and this book documents her daily activities from 1917 to 1919. Most of the entries are pretty humdrum, with many entries simply giving an overview of the weather or stating that they did patrol that day. Other entries are more exciting as they describe the ports visited and ships torpedoed. Sometimes it is hard to tell if the journal is intended to be a record of the ship’s activities or the author’s, one entry from December 2nd, 1917 states “Pay day went ashore and had a nice time.”  This is much different from his entry dated August 19, 1917, where he witnessed the sinking of the British steamer Spectator and details of the event. 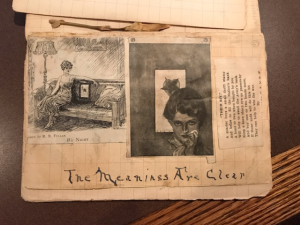 A page of the journal titled “The meanings are clear”, with photographs of women and a poem in it 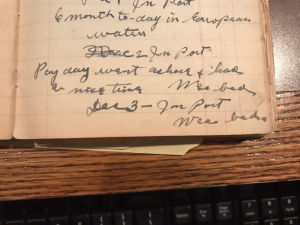 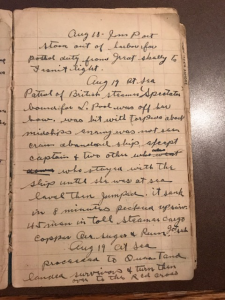 The journal was kept by Alfred George Lawson, a US sailor from Philadelphia.  The last page of “log” part of the notebook states “To whom it may concern. This is the ship log of what it went through and my experience- signed Alfred G. Lawson”. The pages that follow this proclamation are where he pasted newspaper clippings, photographs, and one pressed flower. The clippings are usually comics about the Navy or women missing soldiers. Mixed in with these clippings is a complete list of destroyers that were active in the Navy at that time.

Paulding was decommissioned in August of 1919 and was in the reserve fleet immediately following her service. The journal ends at the end of 1919, but we know that she was loaned to the Coast Guard for Rum Patrol from 1924 to 1930. Rum Patrol was an operation in which the Coast Guard attempted to reduce the amount of liquor smuggled illegally into the United States during Prohibition. While performing this service and stationed in Boston, MA, on December 17, 1927, she accidentally struck and sunk the submarine USS S-4. Despite rescue efforts, the tragic accident resulted in the death of everyone aboard the submarine. From 1930 to 1934 she was again a part of the reserve fleet of the US Navy, and then struck from the registrar and sold as scrap under the London Naval Treaty.

Paulding was the leading ship in the Paulding-class destroyers in the United States Navy. The ships were named after Rear Admiral Hiram A. Paulding, who served in the US Navy from the War of 1812 through the Civil War. In total there were 21 Paulding destroyers, all generally acted as convoy escorts in the Atlantic Ocean during the war. All of these ships were scrapped in 1934.

This journal contains as a wealth of information relating to the first two years in the ~20 year life of an historic naval vessel. We have thousands of other pieces of history related to World War 1 and many other subjects. Please come visit us on the fifth floor of the McFarlin Library M-F from 8:00 to 4:30 to find your own story!

Kelsey is GA in the Special Collections department currently pursuing a Master's in Museum Science and Management.
View all posts by Kelsey Hildebrand →
This entry was posted in General, History, World War I. Bookmark the permalink.