The Most Photographed Dog in the World

Posted on 2020 February 7 by Kelsey Hildebrand

On the morning of February 12, 1946, three gunshots ripped through the air in Claremore, Oklahoma. Those shots killed the famous Collie Sunnybrook, who belonged to Robert and Paula Love. He was known as “the most photographed dog in the world” because he would always greet visitors of the Will Rogers Memorial. His death sent a shockwave through Claremore, where it seems like every resident knew and loved this dog with the exception of the cadet responsible for his death.

According to the many newspaper clippings in the Robert and Paula McSpadden-Love collection about this incident, Lieutenant L. E. Trost mistook Sunnybrook for a stray dog and shot him intentionally. He insisted that he and the other cadets had been given orders to shoot stray dogs and that he had never seen Sunnybrook before. The collection of clippings includes commentary that followed the incident, with articles from as far away as California, Illinois, and Idaho. 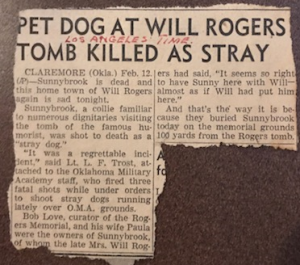 Newspaper clipping from Los Angeles about the death of Sunnybrook. 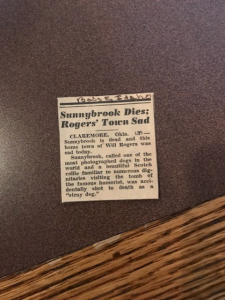 Small blurb from a newspaper in Boise, Idaho, about Sunnybrooks death.

Newspaper clipping from Chicago on February 14, 1946.

Sunnybrook was buried a short distance from the memorial. In the days that followed the incident, the cadet responsible was removed from his post in Claremore to a new post overseas. There are many public opinion articles about this change, stating that “Man is worth more than dog” and that punishing Trost for his mistake was in poor taste. Poor taste or not, this mistake drastically changed the course of this young man’s life. While the event occurred in the 1940’s, it looks like it garnered responses very much like those we see on social media now. 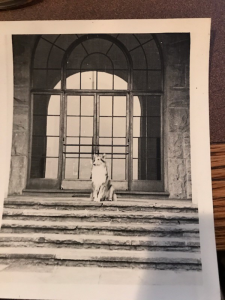 Photograph of Sunnybrook the collie sitting on the steps. of the Will Rogers Museum. 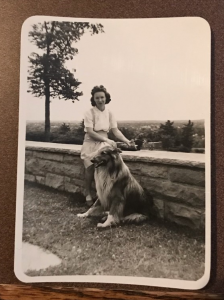 Photo of Paula McSpadden-Love and Sunnybrook standing outside.

I was inspired to write this post by an oil painting that we have of Sunnybrook done by P. Carroll in 1971. I started to wonder what was so special about this dog, so I found the record for the painting in our finding aid and discovered that there is quite the story surrounding it. The painting, photographs, and articles are part of the Robert and Paula McSpadden-Love collection. Not only were they Sunnybrook’s owners, Paula and Robert, were custodians of the Will Rogers memorial from its inception until their deaths in the 1970’s. This collection includes correspondence, family records, research, and photographs relating to Will Rogers and his memorial. 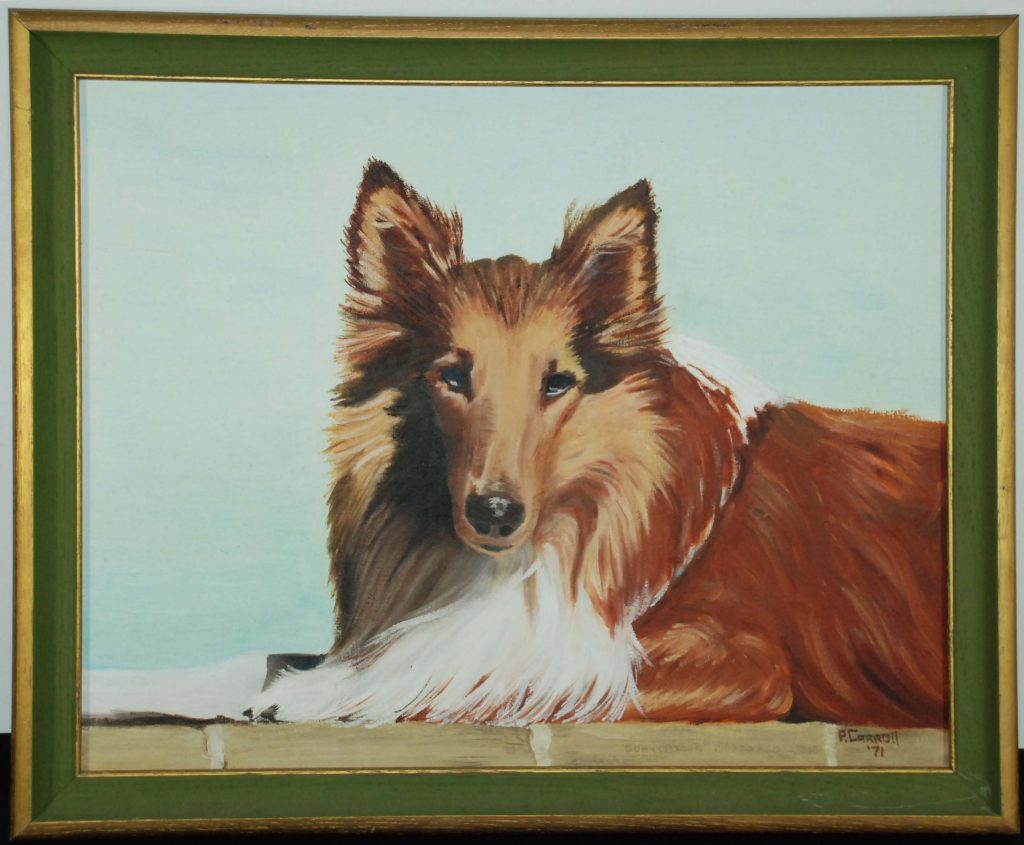 Oil painting of Sunnybrook by P. Carroll from the collection.

Sometimes a picture really is worth a thousand words. The painting of Sunnybrook led me to an entire story about a wonderful dog and the communities that mourned him. I know that I will be going home to hug my dogs a little bit tighter tonight in memory of Sunnybrook the Collie. If you would like to see the objects mentioned in this post or anything else in our collection, please stop by and see us on the fifth floor of the McFarlin Library M-F between 8 and 4:30.

Kelsey is GA in the Special Collections department currently pursuing a Master's in Museum Science and Management.
View all posts by Kelsey Hildebrand →
This entry was posted in artwork, Collections, General, McFarlin Library, Uncategorized and tagged Claremore, Collie, McSpaddin-Love, newspaper, Oklahoma, painting, Will Rogers, Will Rogers Memorial. Bookmark the permalink.