Posted on 2020 February 14 by Jacalyn Pearce

I recently saw a silly sign the other day that said something to the effect of ‘nobody likes old stuff!’ and I want to spend some time debunking that claim. I know for a fact that quite a number of people not only like, but even staunchly love a wide variety of “old stuff.” Old books, old houses, old clothes, old toys, old jewelry…the list could go on indefinitely. I love old things, which is part of what makes my job in Special Collections all the more exciting and I know I am not alone.

Today, in particular, I want to look at old maps because I also love maps (old or new). While Google’s high-tech maps are now ubiquitous, the human tendency to map our surroundings is practically a primordial urge. The fascinating thing about maps is how malleable and authoritative they are, often simultaneously. They can range from the stores in a mall to the entire known universe. Maps are useful for conveying a broad range of information too, not just where people and things are located. 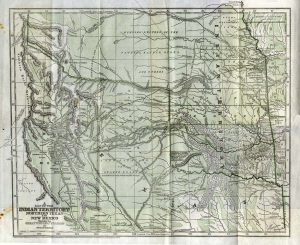 The description of this map of the Great Plains perfectly captures a map’s malleability. While it depicts the physical area with reasonable accuracy, the intention is to advertise the potential uses for white settlers coming to the area, especially since it was published in 1844 on the eve of the Mexican-American War. It emphasizes the vast open land between Missouri, Arkansas, and Texas and the Pacific Ocean that was still occupied primarily by Native Americans and Mexicans.

Here’s a similar map in 1846, after the U.S. finally took that same land from Mexico. Although it’s clearly no longer Mexico, the states west of Arkansas and Missouri are still not generally recognizable yet because the territories had yet to be carved into the states we know today. 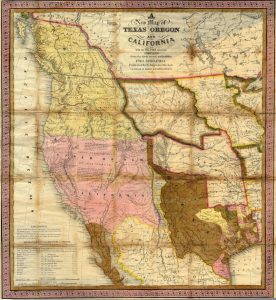 Now I want to look at a historical map of Oklahoma in particular. 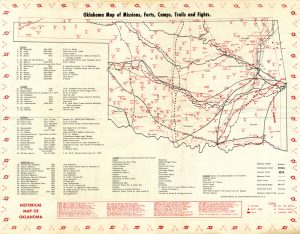 Rather than a specific date in time, this map covers time before and after the Civil War. It covers both the location and dates of forts, camps, battles, missions, and trails, which is quite a bit of information for one map. It would have been critically valuable for anyone who wanted to stake a claim on the land; although American citizens were not officially allowed to purchase plots in Indian Territory until the 1889 Land Rush, many white settlers had already been renting land from Native Americans or squatting for years. The rivers are an easily recognizable reference point, as well as modern-day cities like Tulsa and Oklahoma City. According to the map’s legend, the small red triangles represent ghost towns, but on the back side is an entirely separate map of ghost towns across Oklahoma. 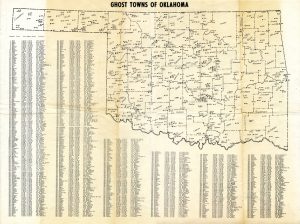 The towns on this map are numbered alphabetically, with the dates of the post office’s existence and a brief location reference. There are only two ghost towns in Tulsa County, Algiers and Weer. Algiers’ post office lasted less than a year, from May to December of 1904. It was located simply “near Skiatook.” There’s a chance that the area it once occupied has been resettled, or maybe it has been continuously settled and changed names. The post office at Weer was established on February 21, 1894 (126 years next week!) and existed for a dozen years before disappearing. However, if Weer was roughly six miles southeast of Broken Arrow, the land it occupied is still settled today, only part of Broken Arrow instead of Weer.

In contrast with Tulsa County, Lincoln and Pottawatomie Counties each have more than two dozen ghost towns. Some of them lasted little more than a year, while others made it more than a decade. Davis City, number 190, was referenced as two miles west of Agra. Since I love looking at maps (really!) and I’m not overly familiar with Oklahoma geography, I naturally consulted Google Maps. Google’s “quick facts” note for Agra mentioned that it was recently put back on the map for its connection to Chad “The Silver Surfer” Chastain, which could lead me down all sorts of fun rabbit holes of research. Davis City was likely absorbed by Agra similar to Weer and Broken Arrow. There is a modern-day Davis, Oklahoma, but it’s located south of Oklahoma City.

I could keep going ad infinitum, but the point is that maps give us a wealth of information in a succinct, visually appealing format that we can reference indefinitely for a variety of reasons. These are only four of the hundreds of maps from across the world that we hold in Special Collections.

If you would like to see them, or any of the other books and objects in our collection, stop by to see us on the 5th floor of McFarlin Library, any time between 8:00-4:30 Monday through Friday.