In 1917, a group of volunteers was formed from the Tulsa Ambulance Company and was adopted into federal service as a unit of the National Guard. It quickly became Oklahoma Ambulance Company No. 1, and then Company 167, 117th Sanitary Train, 42nd (Rainbow) Division, American Expeditionary Forces. The unit spent about 2 years in France pulling the wounded from the front and getting them to medical care. 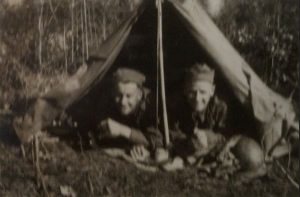 Among its World War I materials, Special Collections has a number of collections specifically from members of this unit, including Amos Todd, Paul Havenstrite, Josiah Clark Chatfield , Joseph Hause, Francis Schmidt, and Hugo “Hap” Gruenberg. 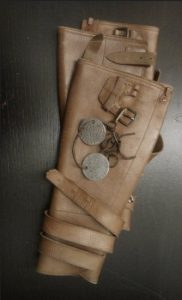 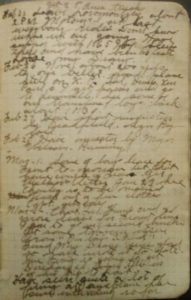 The personal ephemera includes Gruenberg’s diary kept during 1917-1918 (pictured at right), which has been transcribed here (as a pdf); his soldier’s pay record book; Gruenberg’s dog tags and brass key on a leather thong, as well as one pair of regulation leather leggings (pictured at left); photocopy press cuttings of Gruenberg’s obituaries and funeral/memorial record books; National Association of Rainbow Division Veterans memorabilia and veteran related membership cards; and 7 Victrola records, one of which includes a recording of “Rainbow Division March.”

The collection was processed and the diary transcribed in 1991 by Jennifer Carlson, and the Victrola records were recently converted to digital formats. You can now hear some of the music that Gruenberg and others listened to, as mentioned in the diary. To listen, click on either the “mp3” or “ogg” links for the music you’d like to hear.

This collection was donated by Gruenberg’s son, Charles Gruenberg, in September 1991.