Tulsa and the Spanish Influenza

Posted on 2020 May 6 by Kelsey Hildebrand

I looked up the other day and realized that April is over! We stayed quarantined for an entire month. I hope you all kept yourselves busy by enjoying the beautiful spring weather while finishing up the semester. I know that we keep saying that these times are unprecedented, but while I was working on my at-home project for the Special Collections Department I came across some interesting information about Tulsa over a hundred years ago.

Mayor Hubbard was the fourteenth mayor of Tulsa from 1918-1920, during the Spanish influenza. He, like our mayor now, made the difficult decision to close businesses and schools to protect people from the spreading pandemic. He even took it a step further and placed the city under police rule, going to great lengths to stop the spread of the virus that ended up infecting (we believe) five hundred million people. There were already somewhere between three and four thousand cases in Tulsa before he chose to shut our city down, which undoubtedly saved many lives. I do not envy leaders then or now, as I’m sure that these choices are never easy.

Here is a photograph of Mayor Hubbard from our digital archives. This photo was taken in 1920 during a parade with General Purshing, commander of the American Expeditionary Forces on the Western Front in World War I. 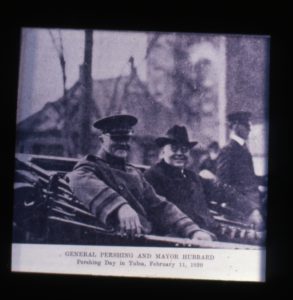 Mayor Hubbard is smiling here, because they are parading at the tail end of the pandemic (and the war!), but I’m sure he was not smiling during most of his time as mayor. The Spanish influenza was active for 36 months, encompassing all of 1918-1920. Over 7,000 people in Oklahoma died during that pandemic, which is caused by a virus believed to have originated in the midwestern United States.

There isn’t a lot of other information about Mayor Hubbard that’s readily available to us aside from his decisions regarding the influenza. The way that he governed during the pandemic became his legacy. Right now we are all in the middle of history, creating our own legacies. I have spent the past nine months learning about how we as archivists preserve history, bringing you incredible stories that we have preserved in our library. This is my last blog post for a few months, but I will be back in August to tell you more stories.

The Special Collections Department is closed, but please keep saving your history and send it to us. We are accepting photographs, journals, and personal accounts of life during the COVID-19 pandemic. This will all be history someday, and we want to preserve it for the future. Stay safe and sane, and I’ll see you soon!