Posted on 2020 October 30 by Kelsey Hildebrand

I hope that everybody is staying warm and dry this week! Today, instead of writing about multiple objects, I’m just going to write about one very special one that was recently brought to my attention.

This is a first edition copy of the novel “Roots: The Saga of an American Family” by Alex Haley. This novel was originally published in 1976 by Doubleday books and tells the story Kunta Kinte, an 18th-century African, captured and sold into slavery in the United States. The story follows Kunta Kinte’s life and the lives of his descendants in the United States all through seven generations to the author himself. The final chapter of the book details how the author traced his ancestry back seven generations to write it. 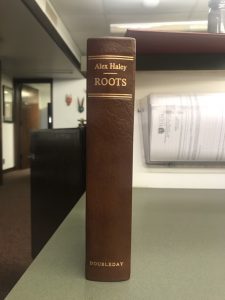 Some booksellers marketed this book as non-fiction, as Haley relied on historical documents and oral historians in Africa to shape his family tree as it is represented in this story. However, most of the incidents and events depicted never happened, making the bulk of the book fictional. Some scholars criticized his research methods and claim that the family tree and other aspects depicted in the book are incorrect. The authenticity of the novel sparked quite a bit of controversy, with scholars all over the world weighing in on Haley’s methods and analyzing the documents that he used to support his novel. Some of the publications related to this research can be viewed in the main library.

The book was an instant bestseller, inspiring a miniseries of the same name in 1977 starring LeVar Burton. The miniseries was extremely popular, with millions of Americans tuning in to watch the eight installments. Both the book and miniseries raised awareness for Black American history and inspired interest in family history and genealogy. 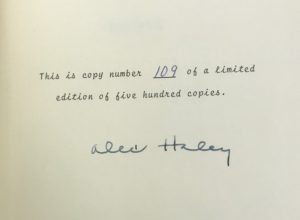 author. Alex Haley wrote two other novels, “The Autobiography of Malcolm X” and “Queen: The Story of an American Family”, the latter of which was published posthumously and was also made into a miniseries. All three of them can be borrowed from the main library today. Our special edition copy, however, will remain housed here and cannot be checked out.

TU students and affiliates are welcome to set up an appointment to come see this book or any of our other treasures. Non-TU affiliates may request digital scans of our materials. To request an appointment or scans, please email us at speccoll@utulsa.edu and we will be happy to help you in your research.

Oh, and have a safe and happy Halloween!