Posted on 2021 February 26 by Kelsey Hildebrand

Today, for the final post of Black History Month, I chose to have a look through some of our books by Black authors. We have quite a few first editions by noteworthy Black authors that I thought I would share with you today. 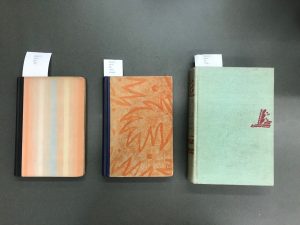 Pictured above are first editions of novels by Langston Hughes (1901-1967), a political rights activist, poet, and novelist, among other things. He is known as the leader of the Harlem Renaissance and his works portray the lives of working-class Black Americans. The book to the far left is “Fine Clothes to the Jew”, a compilation of poems published early in his career that was not well received because many of the poems (including the titular poem) are honest about the poverty in Black communities. Regardless of its reception, it and his first novel, “The Weary Blues” (center), cemented his reputation. 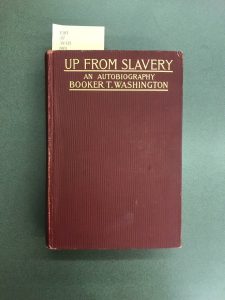 Also in our collection is this first edition autobiography “Up From Slavery” by Booker T. Washington, published in 1901. This one is extra special because it has his signature in it! I did not know that when I picked the book up, it was a really cool surprise when I opened it up. 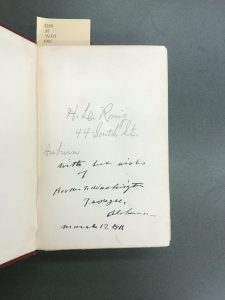 Booker T. Washington (1856-1915) was a part of the last generation of Black leaders who was born into slavery and subsequently became a leading voice fighting for former slaves and their families. He advised multiple presidents and founded the Tuskegee Institute in Tuskegee, Alabama and called for education and supported “racial uplift”, or the idea that educated members of a race should work to uplift others. I do not have enough space in my single blog post to write about all of the work that Washington did in his lifetime. 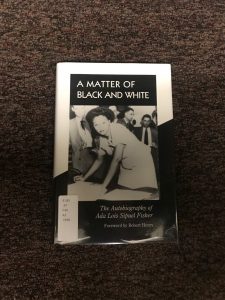 We also have a first edition of “A Matter of Black and White: The Autobiography of Ada Lois Fisher” (1996). Fisher (1924-1995) was a key civil rights leader right here in Oklahoma. Born in Chickasha, she applied for law school at the University of Oklahoma and challenged the state’s current segregation laws and become a lawyer. Her case, Sipuel v. Board of Regents of Univ. of Okla., was heard by the Supreme Court and she was eventually allowed to attend but required to sit and eat separately from her fellow students. Her case paved the way for Brown v. Board of Education, the court case that decided that segregated schools were unconstitutional.

These novels are such small pieces of a much larger history. If you would like to see any of them or something else in our collection, we are still open to TU students and affiliates with an appointment. Please email us at speccoll@utulsa.edu for more information about accessing anything in our archives.

Kelsey is GA in the Special Collections department currently pursuing a Master's in Museum Science and Management.
View all posts by Kelsey Hildebrand →
This entry was posted in General, History, literature, Uncategorized. Bookmark the permalink.