Posted on 2022 February 15 by Abigail Dairaghi

Ann Radcliffe (née Ward) (1764-1823) was an English writer in the 18th century and known as a one of the founders of Gothic fiction. As a writer of the early Romantic period, Ann was a pioneer in the genre of terror and her ability to combine scenes of terror and suspense while maintaining Romantic sensibility.

Ann’s first two novels were published anonymously in 1789 and 1790, but she gained literary fame with her third novel, The Romance of the Forest (1792). By her fourth publication in 1794 of her most famous novel, The Mysteries of Udolpho, Ann had become the most popular novelist in England.

Ann published her last work of fiction, The Italian, in 1797 and soon after sold the copyright of The Mysteries of Udolpho for £500 and The Italian for £800. She spent the last 20 years of her life mainly writing poetry. Ann was a leading exponent of the historical Gothic romance and through her work defined a distinct difference between terror and horror. She went on to influence many Gothic writers and had many famous admirers, including Lord Byron, Samuel Taylor Coleridge, and Christina Rossetti.

Special Collections houses first and third editions of Ann’s novels, including The Romance in the Forest (1792) and Castles of Athlin and Dunbayne (1796). 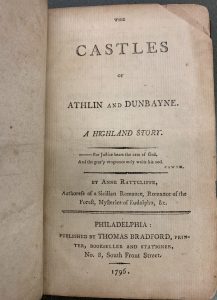 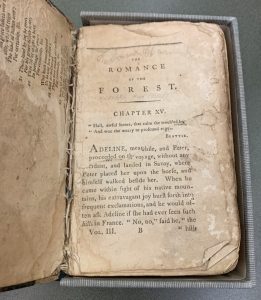 We also have editions of her most famous work, The Myseteries of Udolpho (1794). 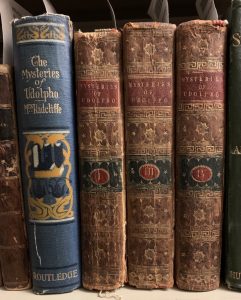