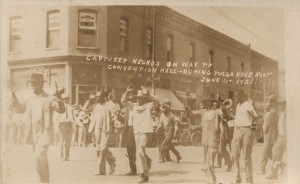 The Department of Special Collections has a collection of many photographs related to the Tulsa race riot, which occurred 31 May-1 June 1921. A small exhibit of these can be found online.

Many of these remain under copyright, even though the identity of the photographer is not currently known. We have tried to identify the photographers wherever possible, and when we don’t own the original, who owns an original copy.

Unfortunately, none of the negatives to the race riot photographs have survived, and so all the known images are from private collections or from the publications, generally newspapers, of the period.

The photograph acquisitions that currently make up this collection are:

Since many of the originals are simple contact print copies, the image area ratio and the film size can aid in identifying the sort of camera used to take the picture.

One of our staff members has been developing the electronic exhibit Tulsa race riot photographs, specifically showing those images that are definitely in the public domain. This is not an official TU website, but is worth looking at as well.