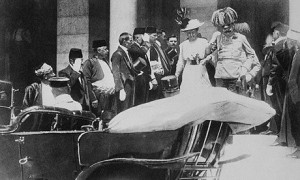 This Saturday marks the 100th anniversary of the day Archduke Franz Ferdinand, the heir of the Austro-Hungarian throne, and his wife Sophie, the Duchess of Hohenberg, were fatally shot in the streets of Sarajevo, the capital of Serbia, by Gavrilo Princip, one of six nationalist assassins. The Archduke and his wife had been visiting Sarajevo to observe Serbian military maneuvers and to preside over the opening of the State Museum’s new facilities. In a tragically coincidental turn of events, Ferdinand and Sophie elected to ride from Sarajevo’s Town Hall to inspect the troops in an open car because Sophie’s low birth often kept the pair apart at most official events. Historian A. J. P. Taylor writes that:

“[Sophie] could never share [Franz Ferdinand’s] rank . . . could never share his splendours, could never even sit by his side on any public occasion.  There was one loophole . . . his wife could enjoy the recognition of his rank when he was acting in a military capacity. Hence, he decided, in 1914, to inspect the army in Bosnia. There, at its capital Sarajevo, the Archduke and his wife could ride in an open carriage side by side . . . Thus, for love, did the Archduke go to his death.” (The First World War: An Illustrated History – 1963, page 13)

The murders led directly to the start of the First World War. Serbian military officials had supported the assassins and stood behind the attack, and when Ferdinand’s father, Emperor Franz Joseph of Austria-Hungary issued an ultimatum to Serbia, the small Balkan nation rejected the demands. The Emperor then declared war on Serbia, an action which embroiled nearly all of Europe in war overnight. All the great powers, Britain, France, Russia, etc. were connected to one another through a series of complex alliances and treaties which promised protection in the event of war. Austria-Hungary’s declaration of hostility was the spark which ultimately kindled the deadliest conflict the world had yet seen.

In remembrance of the 100th anniversary of the Great War, Special Collections will be displaying a series of exhibits commemorating the various stages of the war as their anniversaries roll around. The first of these exhibits, entitled, “Europe 1914: The Beginning,” will examine the first months of the conflict, beginning with the Archduke’s assassination. The exhibit will run from July 1st to September 30th.