It has been nearly 3 weeks since Yevgeny Yevtushenko passed away in Tulsa.  I tried to take several of his classes as an undergraduate student but by the time I was able to register they were always already full.  This speaks to the popularity and influence of Yevtushenko at TU.  Prior to writing this post, I knew that Yevtushenko was an award winning Russian poet but I had no idea of the impact he had in post-Stalin Russia. 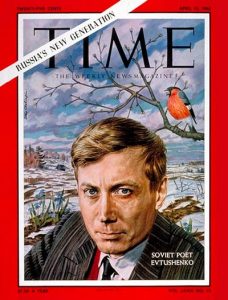 Yevtushenko was born on July 18, 1933 in Zima Junction in Siberia.  He claimed that his love of poetry started at a young age when his father, a geologist, would take him on his work expeditions and read poetry to him on these trips.  He first gained recognition for his writings around the age of 16 but did not become renowned until after Joseph Stalin’s death in 1953.  He did have success in Russia prior to this, but has since referred to his poems from that time as “hack work.”  Those early works were more acceptable to the Soviet culture but soon after Stalin’s death his writings began chastising the government and its actions.  His most famous poem, “Babi Yar,” criticized the Soviet government’s refusal to build a memorial at the sight of a Jewish massacre by German soldiers in Ukraine during World War II.  This writing highlighted the atrocities of the event and gained him world-renown.  Many of the articles I read on Yevtushenko mentioned his charisma and the power he had when reciting his poems.  His recitations seemed to have been more of a theatrical event rather than just a simple reading and often left the audience in stunned silence.  Although Yevtushenko was known and celebrated for his disapproval of the Soviet government, in more recent years he has been criticized for not being critical enough.  Many other Russian writers who became prominent at the same time as Yevtushenko were exiled or imprisoned for speaking out against the government.  On the other hand, Yevtushenko’s denunciations were mostly supported by the government as it removed itself from the more severe aspects of Stalin’s Russia.  However, a Russian woman was quoted in a New York Times article defending him saying that he was brave enough to speak out when many were not and he should not be accosted for surviving his criticism.  Among his other accomplishments, Yevtushenko was elected to the first freely elected Russian Parliament. 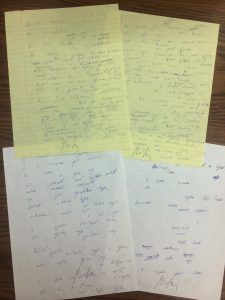 A few pages of “Gorbachev in Oklahoma.”

McFarlin Special Collections and Archives has a small collection of Yevgeny Yevtushenko’s poems that was acquired in 1996.  It consists of handwritten and typed writings in both Russian and English.  There are various versions of the poem “Gorbachev in Oklahoma” as he worked on it and made different edits to it.  Many of the writings are signed by Yevtushenko.  The writer also donated a painting to the department which can currently be seen on display in the Lorton Performing Arts Center.  More information on the painting can be found in this earlier blog post: http://orgs.utulsa.edu/spcol/?p=4382.

Yevgeny Yevtushenko lived a very interesting life and the few writings of his that I have read have been very eloquent and moving.  It is not possible that this blog post could properly encapsulate his life and works and I strongly encourage readers to do more research on Yevtushenko.  Here is a wonderful article from the New York Times that explores his life: https://www.nytimes.com/2017/04/01/world/europe/yevgeny-yevtushenko-dead-dissident-soviet-poet.html?_r=0.