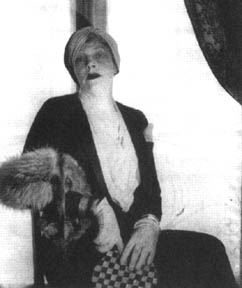 November 26th marks the birth of one of the early supporters of modernism, Margaret Anderson. Anderson founded the Little Review in 1914, a publication notable for being a venue for the more experimental and risqué works by writers such as Ezra Pound, Gertrude Stein, and Amy Lowell. Pound also served as editor of the literary journal and the conflicts between him and Anderson were legendary. Though she was arguably disinterested in equal rights for blacks, Anderson and the Little Review published pieces by notable figures of the Harlem Renaissance as well.

Most famous of the journal’s contributors was James Joyce. The obscenity trial that marked its release resulted from Anderson’s decision to include excerpts from Joyce’s Ulysses. In spite of negative reactions from subscribers and the legal imbroglio, Anderson steadfastly supported the form and content of Ulysses. In spite of the fact that she lauded Joyce’s artistry in relating the experiences of Molly Bloom and Stephen Daedalus, Anderson made some edits to the text in order to avoid the worst charges of obscenity and allow the volumes of the Little Review containing episodes from Ulysses to be disseminated through the mail. Though Anderson had hoped to be a martyr for Modernism by going to jail, she was merely subjected to a fine and a criminal record.

Remembered as much for her contributions to modernist literature as for her eccentric tastes in fashion and her daring personal life (she was a far-left leaning lesbian), Margaret Anderson died at the age of 87 in 1973.