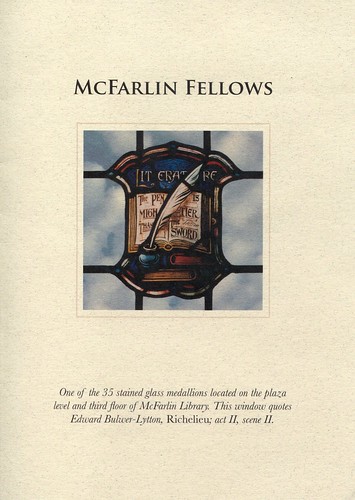 The University of Tulsa Department of Special Collections and University Archives and McFarlin Fellows hosted a reception and dinner this past Thursday, April 16th, with guest speaker Dr. Geoffrey Wawro.  The evening began with a cocktail reception on the Albert Plaza, followed by dinner at the Pat and Arnold Brown Reading Room. After dinner, Dr. Wawro presented his talk titled “A Mad Catastrophe: The Real Reasons for World War I.”

Dr. Wawro is a Professor of Military History at the University of North Texan and the Director of the UNT Military History Center. His primary areas of expertise and interest are modern and contemporary military history. He has published four books on military history, including his most recent publication, A Mad Catastrophe: A Mad Catastrophe: The Outbreak of World War I and the Collapse of the Habsburg Empire, published in 2014.

Wawro has won the Austrian Cultural Institute Prize and Society for Military History Moncado Prize for Excellence in the Writing of Military History. He was a Fulbright Scholar at the University of Vienna from 1989 to 1991 and an Andrew W. Mellon Doctoral Fellow at Yale University from 1991 to 1992.

Wawro’s presentation was based on his most recent book, A Mad Catastrophe: The Outbreak of World War I and the Collapse of the Hapsburg Empire. He charted the decline of the Hapsburg empire before the war, as well as the designs that Germany had before the assassination of Franz Ferdinand. Wawro delivered a fascinating account of a highly debated and complicated topic, ultimately laying the blame for the beginning of World War I at the feet of the newly formed German state.

This entry was posted in Fellows Events, General. Bookmark the permalink.