Nearly everyone has heard of George Bernard Shaw. If not, typically the titles  Pygmalion (later made into the famous My Fair Lady film), The Importance of Being Ernest, or Man and Superman ring a bell.

Known for his searing wit and biting social commentary, it is easy to forget the Shaw was first a book and music critic before his extensive literary career. He is the only person to be awarded both the Nobel Prize (in literature) and the Academy Award (for best adapted screenplay). He declined all other awards, and had a long, prolific life in several areas.

The University of Tulsa Special Collections has a sampling of George Bernard Shaw ephemera that give a wonderful example of his great diversity. The typical copies of clipping about and by Shaw are supplemented by original play bills for numerous plays. The playbills offer insight into the interpretation of Shaw’s works as well as a delightful glimpse into world of early twentieth century advertisement and fashion.

The most insightful part of the collection is the series of letters between Shaw, Dodd, Mead, & Company, and William Cox about including one of Shaw’s articles on a fight for an anthology. Besides some contract issues, Shaw takes umbrage with the cost of the book. 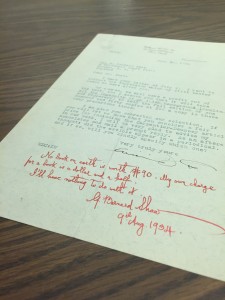 In red ink, he gorgeously, scathingly notes that he thinks “no book on earth is worth $90…” and that he will “have nothing to do with it.” The entire scene plays out like a Saturday Night Live sketch if one only has the humor and wit to appreciate Shaw’s real life from a Shaw point of view.

The George Bernard Shaw Ephemera collection (1984.010) is available at the University of Tulsa Special Collection in the McFarlin Library during regular business hours.