Posted on 2016 February 2 by Abhinaya Rangarajan

February 2, 2016 marks the 134th birthday of James Joyce. Irish novelist and poet James Augustine Aloysius Joyce (2 February 1882 – 13 January 1941) is considered by many to be one of the most important Modernist author, and one of the most important authors ever published in the English language.  Apart from his numerous publications, he was also a prolific correspondent.  The University of Tulsa holds many of his papers, letters and ephemera.

The Department of Special Collections and University Archives is renowned for its extensive Joyceana holdings, including the Harriet Shaw Weaver library, the Paul & Lucie Léon collection of James Joyce (Coll. No. 1984.005), and various correspondence and important editions of the author’s works contained in other collections. 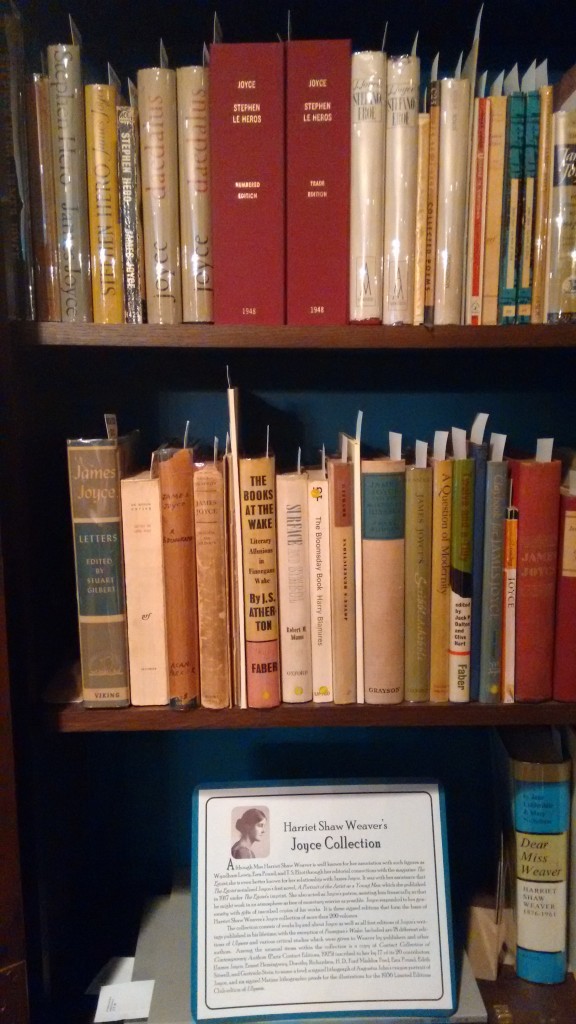 The Harriet Shaw Weaver Joyce collection is the center of the Joyce holdings in the Department of Special Collections and consists of more than 200 volumes. It includes work by and about Joyce. All first editions of Joyce’s writings published during his lifetime are included except for Finnegans Wake. (However, this work is represented in the Edmund Wilson library by a copy heavily annotated in his hand.) Also present are numerous subsequent editions and translations of Joyce’s writings (there are 18 different editions of Ulysses, for example) and various critical studies that had been given to Weaver by other publishers and authors.

In total, the department houses over 700 items by or about Joyce, from first editions to artists’ books, literary criticism, and periodicals. All the collections may be accessed upon request during business hours – Monday through Friday, 8am-5pm.