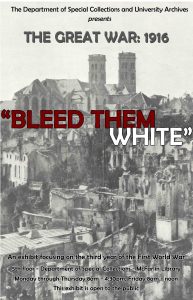 The Department of Special Collections and University Archives presents The Great War, 1916: Bleed Them White, an exhibit focusing on the third year of World War I. To honor the thousands of men who were injured or lost their lives during the ‘year of battles’, Special Collections has created an exhibit showcasing photographs, artefacts, and books focused on the three major battles: Verdun, Jutland, and the Somme. 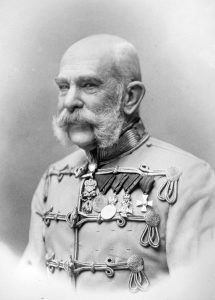 The exhibit also focuses on key events that occurred in 1916, including Romania’s official entry into the war (and subsequent defeat) and the British surrender at Kut Al Amara, as well as highlighting important politicians of the day who were involved in the war effort. Great figures of the year have their own case, including major politicians and rulers like Franz Josef, as well as Marcelle Semmer, a brave Frenchwoman who received the Legion of Honor.

This exhibit will run from June 27 to September 16, 2016. Everyone is invited to come visit the exhibit. The Department of Special Collections and University Archives is open from 8 AM to 5 PM Monday through Friday. It is free and open to the public.