Posted on 2017 September 15 by Amanda Vestal

Thanks to history classes in middle school and the Broadway show Hamilton, most people immediately associate the name Aaron Burr with the fatal duel between him and Alexander Hamilton. However, Aaron Burr was an important figure in earlier American history through politics and his career as an attorney. In December of 1800 Aaron Burr ran in the fourth presidential election that our young country held. A little over a month prior to this infamous election, Aaron Burr had a legal issue brought against him. Despite the fact that I have had trouble finding mention of this dispute in any of the biographies of Aaron Burr, I know of this event thanks to one small box in McFarlin Special Collections and Archives.

This one item is a Writ of Arrest (2014.037) issued against Aaron Burr on October 26, 1800. This warrant issued by the State of New York calls for the arrest of Aaron Burr so he may be brought before the Supreme Court of Albany on the third Tuesday of January 1801. This legal action is to ensure that a debt incurred by Burr may be paid to the estate of a person whose name was indecipherable on the warrant. Burr was called to the court date by Harriet Saltonstall, Frederick Babcock, and Cortland Babcock who are the executors of the will.  The total owed for the debt is $7,840; an additional $17.09 is requested by the executors in payment of damages and for the cost of the case being brought against Burr. This payment today could have totaled anywhere from $113,000 to $152,000. The Writ for Arrest was signed by an attorney by the name of Henry Masterton. It is interesting that this issue, especially since it was a debt of such a large sum, was not brought up during the presidential election. Although Burr lost the election after a tie between him and Thomas Jefferson and was appointed as Vice-president under Jefferson, this was due more to the personal stances of the men in the House of Representatives and not because of any legal grounds against Burr. One of the more fascinating aspects of the warrant is the way the date is written as “the twenty fourth year of our Independence” revealing the remaining strong feelings of the Revolution. 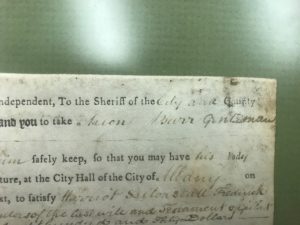 We have very few items related to the American Revolution and early American history so it is very interesting that we have this piece from that time period. This just proves that you never know what you may come across in our collections. To view this item or any of our other materials you can visit Special Collections on the 5th floor of McFarlin Library Monday thru Friday from 8am to 5pm. You can view our finding aid here.