Posted on 2018 September 6 by Molly McVey

French Canadian artist and writer, William Roderick James, was well-known for his illustrations on the American West, specifically of horses and cowboys. He is most known for writing and illustrating Smoky the Cowhorse, which won the Newbery Medal in 1972. He created numerous illustrations for articles in the Sunset Magazine, Scribner’s, the Saturday Evening Post, The Bookman, and other periodicals dating from 1920 to 1932. 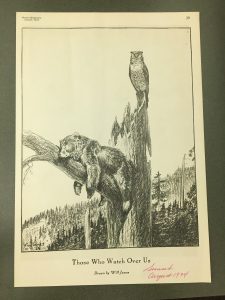 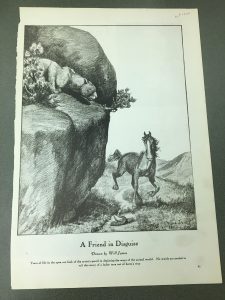 James didn’t start out as an artist, but always found a way to incorporate drawing into his life. While working on ranches he would create drawings on bags, doors, floors, and old catalogs. James realized that he wanted to make a career out of art after he spent time in the Nevada State Prison for cattle rustling. He created several illustrations during his time in jail, “The Turning Point,” “The Past,” “The Present,” and “The Future,” each showcasing a different aspect of his life, ultimately leading to him becoming an artist.

He depicted an accurate representation of western life with its daily drama, excitement, and the various conflicts that arose. Most people during this time period wanted to know more about the lives of cowboys, since a majority of their knowledge came from Hollywood movies. James was able to accurately portray this lifestyle with his outstanding illustrations of bears, cattle, and especially bucking horses. When looking at his illustrations, you can see that James knew every aspect of the Western American lifestyle. 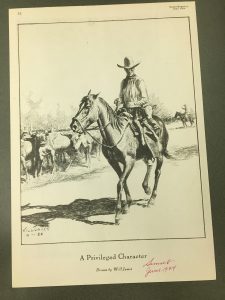 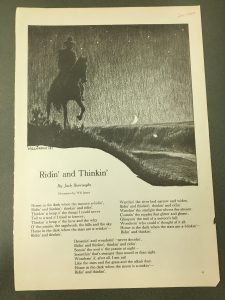 The William Roderick James Publication Collection is composed of 79 items including illustrations, articles, and biographical materials. If you are interested in seeing more illustrations, you can always come see us in Special Collections, located on the 5th floor of McFarlin Library, Monday through Friday 8:00 am until 4:30 pm.