Craig Sheppard was born in Lawton, Oklahoma, in 1913 and studied art at the University of Oklahoma in Norman. During his college days, he was also a bareback rider in rodeos from Oklahoma to New York’s Madison Square Garden. After college, he worked as a wartime draftsman at the Douglas Aircraft plant in Tulsa, Oklahoma. While there he would create three-dimensional drawings from the complicated blueprints for aircraft assembly.  He was also an art instructor at the University of Montana in Bozeman. In 1947 he became the chair of the art department at the University of Nevada. In 1955, he was given a Fulbright award to lecture at the University of Oslo on Native American art. While in Norway his artistic style became more abstract, flat, and new colors immerged making his art more vivid, while stronger linear contours started to appear in his pieces. He traveled throughout Europe many times and brought a new element to his artwork with each trip. In his final year of life, he was awarded the Artists of the Decade Award from the Nevada State Council on the Arts in 1978. 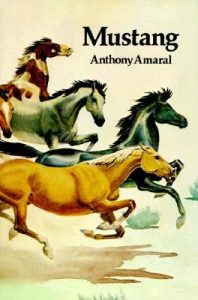 His artwork was versatile, from book illustrations, watercolors, and even murals. He’s best known for his watercolor paintings of western life-horses, riders, and ranchers on the range. Some of these illustrations can be seen in Anthony Amaral’s book Mustang: Life and Legends of Nevada’s Wild Horses, which a leather-bound copy is located in Special Collections (636.1009793 A485M). The book traces the history of the Mustangs in Nevada down to the Taylor Grazing Act of 1934, including photographs of the wild horses and the men who captured them.

If you’d like to see Craig Sheppard’s illustrations in the book Mustang: Life and Legends of Nevada’s Wild Horses (636.1009793 A485M) written by Anthony Amaral, you can always visit us in Special Collections, located on the 5th floor of McFarlin Library, Monday through Friday, 8:00 am until 4:30 pm.