Posted on 2020 December 18 by Jacalyn Pearce

Happy holidays everyone! Today is the last day of work before Christmas break after what has been easily the most difficult semester of my entire academic career! I am looking forward to seeing at least some family for Christmas as we all continue to ride out this pandemic.

I recently found a little collection by a woman named Enid Bagnold. Google revealed that she was the author of the novel National Velvet, which I recognized from the 1944 Elizabeth Taylor film adaptation that I once saw, years ago. I found a mini-bio from Encyclopedia Brittanica that gives a basic overview of her life. With only three folders holding little more than a few dozen letters, I thought I would share with you the few I was able to scan. The letters in our collection are addressed to Cynthia (our cagalog entry mentions Cynthia Asquith, though I never saw her complete name in the letters). 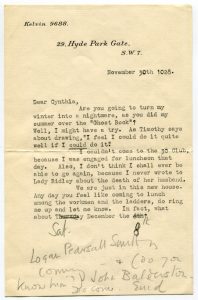 This first letter first caught my attention because of the typo in the date and I giggled at thinking how much of a difference there is between 0 and 9, even though I understand  what a hassle it would have been to correct on a typewriter (I’m more ready to forgive this than typos in the day of the computer). From the context, I suspect that Cynthia, who was well known for writing ghost stories, to ask her to write a ghost story as well, and she apprehensively decided to try it. 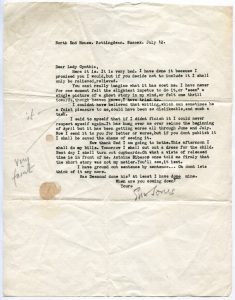 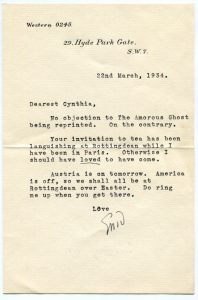 Although the letter on the left is dated only July 12, from the salutation, I imagine it was still early in their friendship and likely not too long after the letter above. Enid’s description of her attempt at the ghost story suggests that they must have been well enough acquainted for  her to write a story so “bad, very bad…ground out sentence by sentence.” I can completely relate to that feeling as a writer and wonder how hard she was being on herself. Compared with the letter on the right, though, I’m curious about The Amorous Ghost.

These three letters were written in the interwar years, so I was interested to see how life changed for them during WWII. 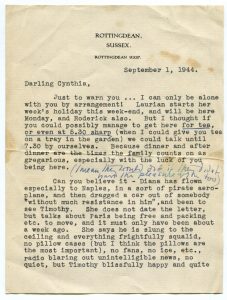 For a time, I wondered who Laurian was, but eventually realized that Laurian is Enid’s daughter. (When searching for National Velvet in our collections, you will see that Laurian illustrated the novel, which I think is pretty cool.) Even in wartime, Diana (whoever she is) flew “especially to Naples…and then dragged a car out of somebody” to see Timothy (who may be Enid’s son). While the war was raging, they still managed to live extremely well.

This undated memo isn’t even addressed to Cynthia, though the mention of Desmond suggests that she is probably the recipient. 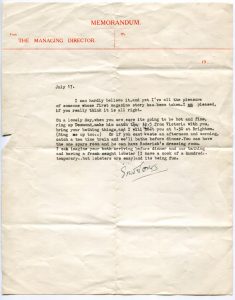 The last few lines, and the letters above, really highlight their privilege though, which other letters call even more attention to when you read them closely. I imagine that they had to be touchd by the war, but it doesn’t seem to have affected them as much as I thought it might have. They would have been prime candidates for the show “Lifestyles of the Rich and Famous: WWII Edition” had it been a thing back then.

If you’d like to see these letters or the many other collections we hold, please contact us at speccoll@utulsa.edu for arrangements. We will be closed for winter break starting on December 21, and reopen January 4. You are also welcome to browse our Catalog and Digital Collections and if you have any questions or requests, Kelsey and I will be back and happy to help you in 2021!  We hope you have a safe, healthy, and happy holiday season!