For my penultimate post as a Special Collections Graduate Assistant, I am revisiting the topic of the research paper I wrote for a History class my very first semester. In the entrance to Chapman Hall there is a large plaque that caught my eye. I mentioned it both to my professor and to Marc, who told me that there were a few photos and papers about Milo in our department. 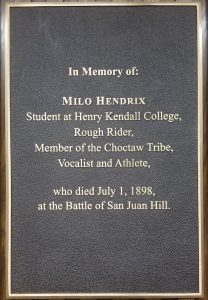 The plaque that started it all

Milo had been a student at Spencer Academy and transferred to Henry Kendall College with William Robert King, the new president. He was a member of the school’s first quartet, along with Ben McCurtain, Eugene Gilmore, and Sam Matthews. 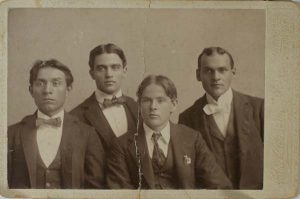 Here’s a photo of the Quartette, as they called themselves, pictured with an unnamed woman. 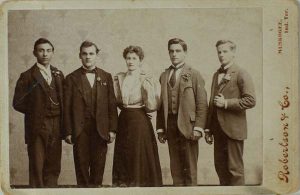 In addition to the Quartette, Milo played on the football team as well. 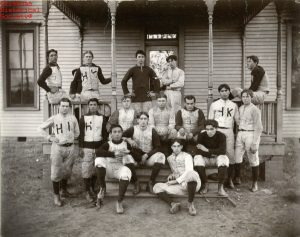 Milo is seated, wearing a dark shirt, next to the man standing and wearing the HK jersey

These photos were both taken in the fall of 1897, the last season that Milo played. 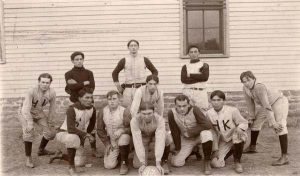 Milo is kneeling, 3rd from the right

On May 12, 1898, one hundred and twenty-three years ago yesterday (!), Milo and Eugene Gilmore were among the two hundred men from Muskogee, Indian Territory, who enlisted in Theodore Roosevelt’s Rough Riders regiment. They trained in Texas, where Milo wrote a few letters to Alice Robertson. 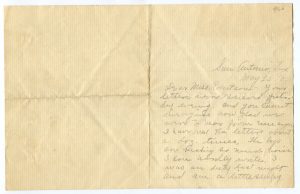 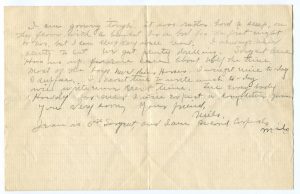 Milo and Eugene arrived in Cuba at the end of June. They fought the Spanish in a battle at Last Guasimas and then the infamous Battle of San Juan Hill, where Milo was killed by shrapnel. Eugene wrote letters to his father, Alice Robertson, and a neighbor named Thomas Owen, telling them that Milo died. 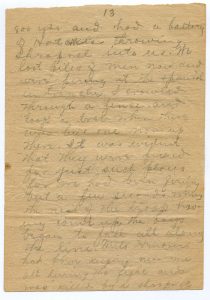 In a letter to his father dated July 26th, Eugene wrote that “Milo had been keeping near me all during the fight and was killed by a shrapnel” and he wrote an undated letter to Tomas Owen where he said that Milo had been killed almost instantly but that he didn’t know it at the time. He said that Milo had been buried on San Juan Hill, but his remains were eventually exhumed and moved to Arlington National Cemetery; on her first trip to Washington D.C. newly elected Congresswoman Alice Robertson made a visit to Arlington and found his grave, #15,519.

These photos and letters are practically all that remains of Milo Hendrix, but learning about him taught me so much about Henry Kendall College, TU, the Spanish American War, and the Special Collections department. During these two years I’ve spent in Special Collections, I’ve seen so many amazing books, photographs, and objects and I still barely scratched the surface of the untold mysteries we have here!

Although our time here has come to a close, Kelsey and I have put together one last exhibit of some of the fantastic books that are part of Special Collections. We are open to TU students, faculty, and staff by appointment only, plus we can provide digital scans of images for non-affiliates. Email speccoll@utulsa.edu for information.