St. Patrick’s Day may have passed, but here at Special Collections we are always finding a good reason to celebrate Irish roots. Today we are focusing on Irish poet, playwright, and writer Oscar Fingal O’Flahertie Wills Wilde. Oscar Wilde was part of the late 19th century aesthetic movement in England, which focused on advocating art for art’s sake. He is remembered most for his comedic plays and single novel, The Picture of Dorian Gray.

Wilde was born in Dublin on October 16, 1854 to a father who was a surgeon and a mother who was a poet and Irish revolutionary. He studied at Trinity College in Dublin as well as Oxford, where he became involved in the aesthetics movement. After graduation, Wilde moved to London where he published his first collection of poetry in 1881, titled Poems. On May 29, 1884, Wilde married Constance Lloyd, a well-read and outspoken daughter of a prominent barrister. They had two sons, Cyril in 1885 and Vyvyan in 1886. The next six years are said to be his most creative, with Wilde becoming editor of a fashionable magazine, Woman’s World, and the publication of his two collections of children’s stories, The Happy Prince and Other Tales in 1888, and The House of Pomegranates in 1892.

By 1889, Wilde had left the editorship of Woman’s World to write his novel The Picture of Dorian Gray, which was met with critical protest. Though the novel is filled with witty dialogue and beautiful descriptive passages, people were appalled by its implied homoerotic themes. Wilde published three more plays between 1893 and 1895, all highly acclaimed and firmly established Wilde as a playwright.

In 1891, Wilde met Oxford undergraduate Lord Alfred “Bosie” Douglas and they soon became lovers. The two were inseparable until 1895, when Wilde was accused of homosexuality by Douglas’s father, the Marquis of Queensberry, and was arrested. He was found guilty of “gross indecency” and was sentenced to two years of hard labor. While in prison, Wilde composed a letter to Douglas entitled De Profundis an eloquent reflection upon his love turned to bitterness and deep attachment he felt for Douglas. He reflects upon his time in prison and the ridicule he was subjected to with emphasis on the importance of individualism, imagination, self-expression, and self-development. Upon his release, he gave the letter to his close friend and lover Robert Ross to be sent to Douglas and to eventually be published.

After being released, Wilde went on to publish The Ballad of Reading Gaol in 1898, a response to the agony he experienced while imprisoned. At the time of his conviction, his wife Constance had taken the two children to Switzerland where they changed their name to “Holland”. Wilde spent the last few years of his life wandering Europe and staying with friends. He died in Paris at the age of 46 on November 30, 1900 from meningitis, due to a reoccurring infection he received while in prison.

Here in Special Collections, we hold a vast amount if information on Oscar Wilde from our collection of Richard Ellmann papers. Ellmann did extensive research on the life and writings of Wilde, which amasses to about 37 boxes of archival information! Included in this collection is even an original letter from Oscar Wilde dated from 1889. 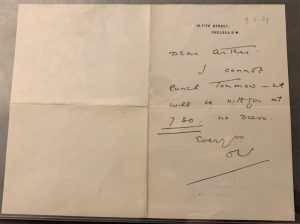 We also house many editions of Wilde’s works, including many early editions from the late 19th century. 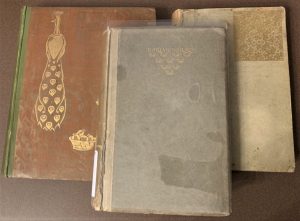 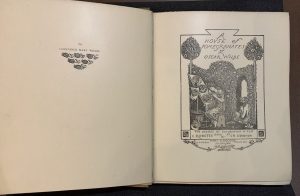 To end, I leave you with a passage from Wilde’s De Profundis:

“Society, as we have constituted it, will have no place for me, has none to offer; but Nature, whose sweet rains fall on unjust and just alike, will have clefts in the rocks where I may hide, and secret valleys in whose silence I may weep undisturbed.  She will hang the night with stars so that I may walk abroad in the darkness without stumbling, and send the wind over my footprints so that none may track me to my hurt: she will cleanse me in great waters, and with bitter herbs make me whole.”

If you would like to explore the vast collection and works of Oscar Wilde, Special Collections is located on the fifth floor of McFarlin Library. We are open 8-4:30pm Monday through Friday, available through appointment only. We are open to questions at speccoll@utulsa.edu

This entry was posted in Uncategorized and tagged LGBT+, Literature, Oscar Wilde, Special Collections, university of tulsa. Bookmark the permalink.