Greek tragedian Sophocles (roughly 496 BCE-406 BCE) is one of classical Athens’s great playwrights whose work has survived the test of time. As the younger contemporary of Aeschylus and the older contemporary of Euripides, Sophocles wrote over 120 plays. However, only 7 have survived in a complete form.

Sophocles grew up in the village of Colonus outside of Attica to a wealthy family and received a very high education. His literary career began in 468 BCE at a Dionysian dramatic festival in which he defeated the renowned Aeschylus. Sophocles competed in festivals about 30 times, meaning he wrote around 123 dramas. He never received lower than second place.

Many major and minor dramatic innovations are credited to Sophocles. This includes the addition of a third actor to dramatic performances, deepened character development and character arcs, and the introduction of scenery paintings (credited by Aristotle, though other scholars disagree). His surviving plays include Ajax, Antigone, Trachinian Women, Oedipus the King, Electra, Philoctetes, and Oedipus at Colonus.

At Special Collections, we hold two special editions of Sophocles’ dramas dating 1544 and 1568 CE. Both have text in Greek and titles and commentary in Latin. 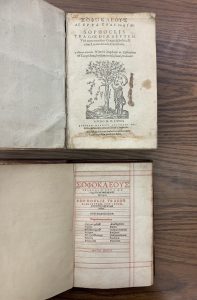 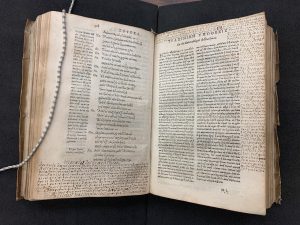 The 1544 edition has the inscription  “formerly belonged to the Rev. Thomas Kidd … and contains a few memoranda in the handwriting of the late Richard Porson, Regius Professor of Greek in the University of Cambridge”. 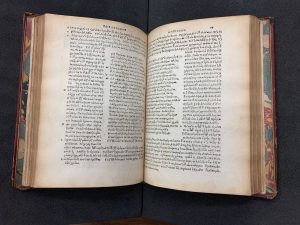 We also have a miniature book of Sophocles plays, measuring 9.5cm by 13.5cm. 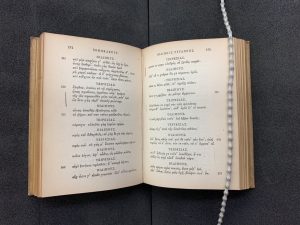 To end, I will leave you with the riddle the Sphinx posed to Oedipus to cross into Thebes and end the plague she set upon the land, thus become king.

“What walks on four feet in the morning, two in the afternoon and three at night?”

If you would like to explore the works of Sophocles we hold at Special Collections, we are open Monday through Friday from 8-4:30pm through appointment only. We are open to questions at speccoll@utulsa.edu

This entry was posted in Uncategorized and tagged Greek, history, Sophocles, Special Collections, Tragedy, university of tulsa. Bookmark the permalink.